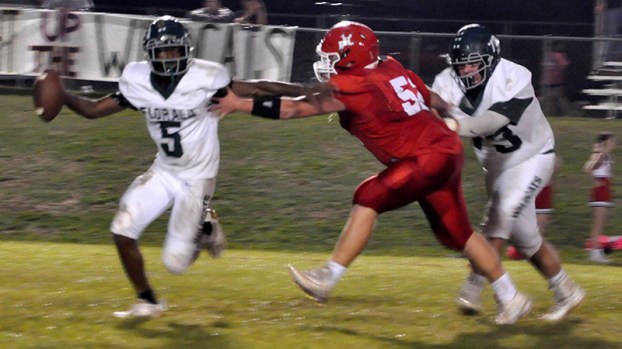 Pleasant Home’s Nick Taunton gets past a Florala blocker and puts pressure on quarterback Rayshon Coleman.

In a defensive battle for both teams, Florala held on for a 19-12 road win at Pleasant Home Friday night.

Neither team was able to find an offensive rhythm on the first four drives of the game. Rayshon Coleman rolled around the left side and picked up the initial first down from either side on the third series for the Wildcats (3-4, 3-2 1A Region 1). Austin Howell then moved the chains with a 12-yard run and put the ball inside the red zone. The Eagles (1-6, 1-4) fought back and forced a turnover on downs with 2:31 to go in the opening quarter.

After an illegal substitution penalty by Pleasant Home, Mason Anderson threw a 37-yard strike to Ethan Curry for a first down into opposing territory. The drive stalled when Florala forced an incomplete pass on fourth down, and the game stayed scoreless after one. Coleman began the second quarter with an 11-yard dart to Colby Strickland as John Howell followed with a 14-yard sprint to the home 35. The Wildcats fumbled the ball four plays later, but the Eagles were unable to capitalize on the miscue.

FHS drew first blood on its next possession with an eight-play drive and took just over three minutes. Coleman converted a critical fourth down with a 5-yard run and moved the chains. PHS forced a pair of incompletions to set up fourth down again. This time, Coleman found Zane Weeks open for a 42-yard touchdown strike. The PAT was no good keeping the score 6-0 with 3:45 left in the first half. Pleasant Home responded right back and only needed a minute and 21 seconds to tie the game at 6-6. Josh Hawkins had an 18-yard first down run before Anderson connected with Curry on a 30-yard touchdown pass. Florala used Coleman’s feet and arm to move the ball down the field before the half, but Jordan Davis came through with a clutch interception to keep the game tied at the break.

The Eagles quickly went three and out and saw their punt blocked to open the second half. Coleman hit Weeks on a 17-yard gain, and Johan Zamora used a 6-yard scamper to move the ball to the 11. The Wildcats ultimately saw their fourth down luck run out and turned the ball over on downs. PHS went on a long drive and picked up first downs by Anderson, Hawkins, and Ty Clark. The contest moved to the fourth still locked in a 6-6 tie. The FHS defense came up with another stop but saw the offense pinned back deep.

Pleasant Home promptly answered with a 59-yard touchdown from Anderson to Curry and took a 12-6 lead with 8:28 to go. Florala was unfazed and tied it up at 12-12 on the next drive. Coleman kept the possession alive with a fourth down conversion, and Zamora pushed the ball inside the red zone with two first down runs. Coleman rumbled around the right side and scored from 10 yards out. PHS was forced to punt on its next possession, and FHS took over with 1:43 to go in regulation.

Coleman found Dalton Jackson on a 15-yard pass for a first down to the 32. After a defensive pass interference call, two incompletions set up third down. Coleman found Strickland in the middle of the field for a 14-yard touchdown. Jackson added the PAT to give the Wildcats a 19-12 lead with 2 seconds to go. The Eagles kept the game alive with several lateral plays before the ball hit the ground.

Both teams continue region play next week as Florala hosts McKenzie (4-4, 2-3) on Thursday, and Pleasant Home travels to Kinston (5-3, 3-2) on Friday.

The Andalusia Bulldogs led for three and half quarters, but ultimately fell to the Crestview Bulldogs in a cross-state game,... read more