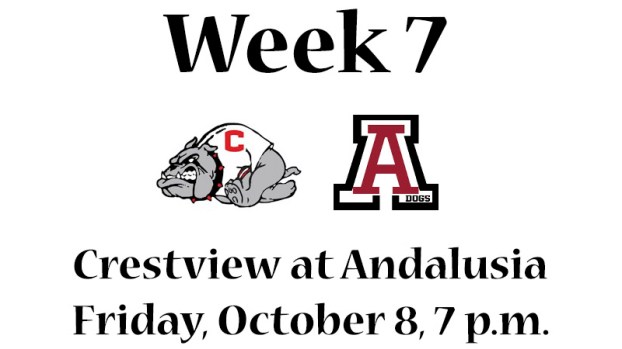 After a strong defensive showing, Andalusia (5-2) steps away from region play for a game with Crestview (3-3) Friday, Oct. 8 at 7 p.m.

AHS used 22 points in the second quarter and shut down Headland on the road, 41-2. CHS suffered its third straight loss last week and was doubled up at Niceville, 42-21.

Head Coach Trent Taylor said it was a good thing to be able to play a lot of players in the last game. “It was one of those games where did everybody did their job. Those guys work extremely hard, and they deserve to get to play. It’s good to see them get out there and get some reps.”

According to Taylor, the older guys did exactly what was needed. “They took care of business early, and it was one of those games where everybody did their job. Now, we’re onto the next one,” he said.

The next one brings 7A Crestview to Andalusia. “It becomes a numbers game, but they’re very talented and play in a strong region,” Taylor said. “Offensively, they will go empty and do a lot of different things out of the spread. Defensively, they just put everybody in the box and dare you to throw the football. They make it very difficult to run the ball and do a really good job.”

Playing in a seven-team region allowed the Bulldogs to schedule this game.

“Fortunately for us, they needed a game and had an open date, which is kind of odd this time of the season. Last year, we didn’t have a game at this time. To have a game that close and be able to play is huge,” Taylor added.

The teams will meet for the fourth time overall and first time since 1988. Andalusia holds a 2-1 lead in the series and 69-37 scoring edge over Crestview in the previous three outings. AHS won in the 1980 and 1988 seasons while CHS earned a home shutout in 1987.