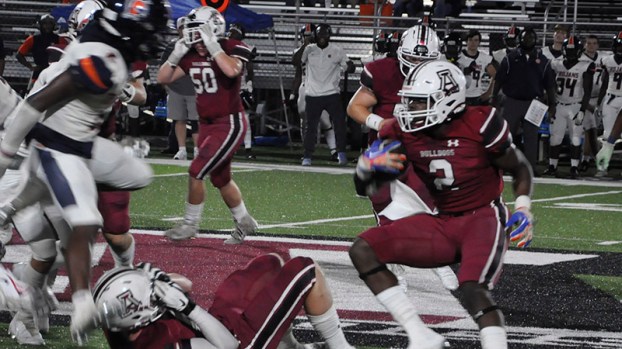 J’Marion Burnette looks for an opening during a run play in Andalusia’s region game against Charles Henderson. Burnette led the rushing attack with 103 yards and two touchdowns.

Andalusia used a strong offensive attack with eight touchdowns and ran all over Charles Henderson at home, 58-28, Friday night.

The Trojans wasted no time and scored on the second play of the game. Parker Adams threw a 70-yard touchdown pass to Cody Youngblood. The PAT was blocked and kept the score 6-0.

Ayden Amis threw a 24-yard touchdown strike to Lucas Jordan, and Cole Morgan added the PAT to extend the score to 22-9. Burnette hauled in a 2-yard score from Amis, who also added the two-point try. Andalusia led Charles Henderson at halftime, 30-9.

Burnette began the second half with an 8-yard run into the end zone. Morgan added the PAT to push the score to 37-9 with 9:06 left in the third.

The Trojans cut the deficit down to 37-17 with a 1-yard run by Antonio Frazier as action moved to the fourth.

The Bulldogs picked up a 2-yard run from Omare Latimer to start the final quarter. Kolya Barton added the PAT to make the score 44-17. Zade Newton then ran in for a 3-yard score and extended the AHS lead to 51-17.

Nikolas Peerson made his second field goal to bring CHHS within 51-20. Newton found the end zone again on an 18-yard scamper for a 58-20 lead.

The Bulldogs return to action next Friday against Bibb County (4-1) and celebrate Homecoming.