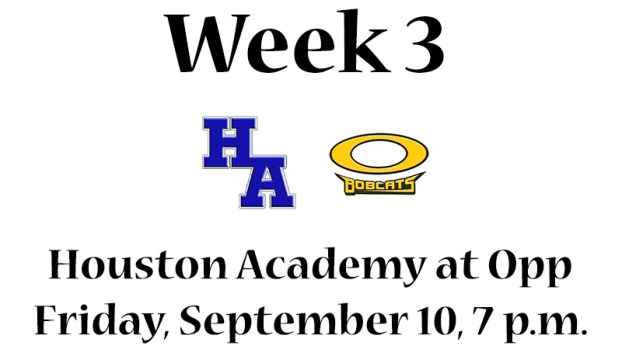 Both teams kicked off the region schedule with lopsided wins last week. The Bobcats handed New Brockton its first loss, 27-0 while the Raiders kept Daleville winless, 50-6.

“We did not play well our first game, and I was looking for improvement. I felt we made those on offense, defense, and special teams. We still had some mistakes but not as many as we did in the first week. We did play better up front, and it was a good win for us.”

He added the team had a good start to the week at practice. He said, “Because of the holiday, we took some time to look at film and come up with a game plan for this week. We also got some weight workouts and conditioning in, so it was a good day.”

Dubose said Houston Academy would be much improved this year.

“Coach (Eddie) Brundidge has done a really good job, and it looks like he has gone out and gotten more speed on his team. He has hired one of my former coaches, and they also have a former Opp head coach. They know an awful lot about us, so it will be a challenge for us.”

Brundidge returned to the sideline this year for the first time since 2003 when he was at Jackson. He has been coaching for 32 years with a 21-44 record as head coach.

Opp made the trip to Dothan worthwhile last season and shut out Houston Academy, 35-0.