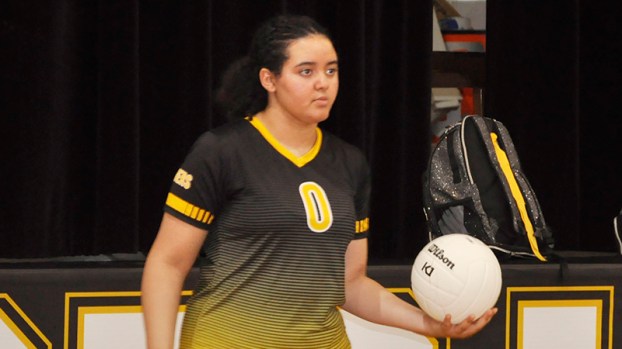 Nicole Frank keeps a close eye on Barbour County as she prepares to serve the ball.

The match was the first sporting event for BCHS since February 2020. The school opted out of athletics last school year due to the pandemic. 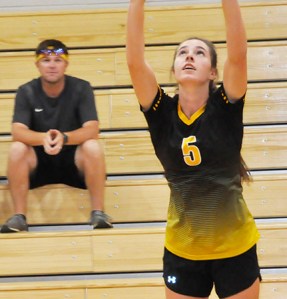 Elizabeth Cross gets ready to set the ball to one of her teammates.

RLS Head Coach Ashley Wright was proud of her team’s effort. “We were able to play some of the younger girls and give them a chance. Our opponent had to come a long way to play today, but it was nice to get our first win of the season. We will continue to work hard and give it our all each match,” she said.

Kayley Peebles scored an ace for the first point of the match before the Jaguars tied it at 1-1. After a service error, Elizabeth Cross earned back-to-back aces for a 4-1 lead. The Tigers continued their hot start as Madison Lee added an ace to make the score 12-2. Shakala Bryant had a kill for Barbour County at the 14-4 point. Summer Beverly used an ace to extend the lead to 17-5. Aaliyah Peterson cut the deficit to 20-10 with a kill, but Ruby Carroll had an ace as Red Level closed out the set. 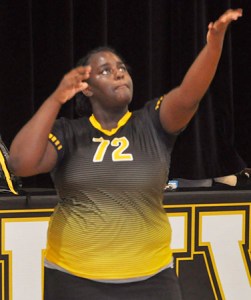 KeMariah Crittenden eyes the ball intently as she concentrates on a serve to Barbour County.

Enasia Ivory gave BCHS an early 1-0 lead in the second set. Four straight aces from Elizabeth Cross shifted momentum the other way as RLS built a 7-2 advantage. Maci Cross had an ace to give the Tigers a 14-5 lead. The Jaguars scored the next point on a service error but then went cold. Kennedy Lord notched three aces down the stretch as Red Level finished on an 11-2 tear.

Barbour County began the third set with a 2-0 lead thanks to an ace by Gabby Merrill. KeMariah Crittenden collected an ace to cap a 9-1 surge and give Red Level a lead it did not relinquish. The Jaguars fought back and trimmed the deficit to 12-9. Merrill used another ace to make the score 16-12. Beverly and Crittenden also had aces to give the Tigers a 23-13 lead and ultimately the sweep.