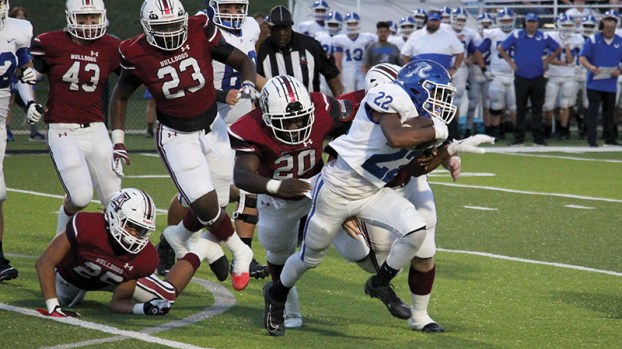 Cameron Johnson (20) and Josh Riley (30) take down a Rehobeth runner.

The Andalusia Bulldogs kicked off at home for the first time this season and got off to a fast start in area play with a victory over Rehobeth, 45-6.

The running game came up big for the Bulldogs, rushing for a total of 323 yards in the contest. J’Marion Burnette led the charge with 160 yards on 13 attempts and scored three touchdowns. Zade Newton, who received carries late in the game as a freshman, ended with 106 yards and a touchdown. 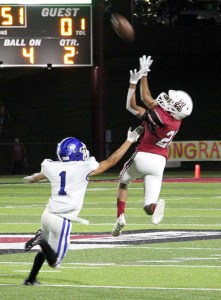 Kaden Denson goes up high over a Rehobeth defender to haul in a reception and a big gain for the Bulldogs.

The Bulldog defense held a shutout until deep into the fourth. Leading tacklers were Mathew McDonald, Zavier Hamilton and Garrett Blackston, each with 4.5. McDonald and Blackston each had an interception.

Head Coach Trent Taylor said his team had a good week of practice, which led to positive results on the field.

“We’re not there yet. We still have some things to work on. I think we threw the ball better tonight. Once we completed a few passes we got (defenders) out of the box. We’re going to enjoy this win and start getting ready for a tough one next week,” Taylor said.

An early turnover on Rehobeth’s first possession led to a quick 3-0 lead for the Bulldogs after a 32-yard field goal by Cole Morgan.

A tackle for loss by Mathew McDonald helped set up a quick three-and-out for Rehobeth. The punt was returned 38 yards by Omare Latimer to the Rebel 24-yard line.

From the 6-yard line it was Burnette hitting a hole along the line for the touchdown. The Bulldogs went for two as Ayden Amis hit Zavier Hamilton to make the score 11-0.

Rehobeth got their offense going late in the first with a series of first downs into Bulldog territory. Threatening at the 9-yard line, the drive came to an abrupt halt when Garrett Blackston came away with an interception.

On the first play Amis found Kaden Denson for a big play, going 56 yards to the Rebel 40. Latimer picked up 11 yards on the next play and Burnette followed with 20 more to the 9. But, the drive ended with a fumble at the 7-yard line.

After an exchange of possessions, Andalusia took control at their own 44. On third-and-five, Burnette picked up 11 yards and a few plays later picked up 20 more. Hamilton took a handoff forward for 10 yards to the Rebel 13. From the 5-yard line, it was Michael Hourel Jr. who took it into the end zone. Morgan’s PAT was good to lift the Bulldog lead to 18-0 with less than a minute to go in the first half. 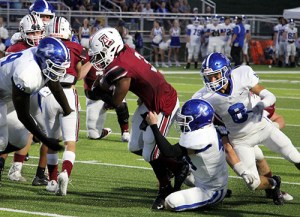 Andalusia came out fast to start the second half, driving 60 yards to the end zone. Burnette had 36 of those yards, including the six needed for the touchdown. Morgan’s point-after made the score 25-0.

Burnette was at it again on AHS’s next possession. He took the first handoff 43 yards to the Rehobeth 10-yard line. After a penalty, Burnette was in the end zone again on a 19-yard pickup. The point-after made the score 32-0 midway through the third quarter.

The Bulldog defense got the ball back for the offense when Mathew McDonald came away with an interception.

On the first play, Amis hit Latimer for a 22-yard gain and that was followed by an 11-yard run for Hamilton. From the 23, Amis found Lucas Jordan open for the touchdown. Morgan’s PAT made the score 39-0.

The Bulldogs went deeper into the depth chart for the fourth quarter, but it did not stop the scoring. Freshman Zade Newton added another touchdown after a six-minute drive, making the score 45-0.

Rehobeth got a nice kickoff return across midfield and then marched 40 yards for their only score of the game, leading to the final of 45-6.