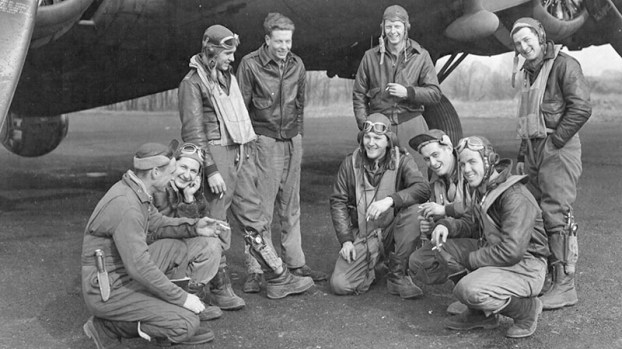 Beasley is pictured kneeling in the center.

First Lt. Harold H. Beasley of Andalusia was one of tens of thousands of American airmen who died in the air war against Hitler’s Germany. Notably, Beasley’s service was at the center of what would become the focus of the public’s imagination of the U.S. 8th Air Force (8th AF) and its enduring mythos through movies such as William Wyler’s documentary Memphis Belle, 1949’s 12 O’Clock High and later the 1991 fictionalized Memphis Belle movie. As a B-17 pilot in the 91st Bomb Group (91st BG), Beasley flew several missions alongside the famed Memphis Belle from November 1942 until his death in April 1943. Footage of Beasley’s planes appears in the documentary. On April 17, 1943, Lt. Beasley died when his flaming B-17 crashed near Bremen, Germany. It was his 18th mission. He was 27 years old. 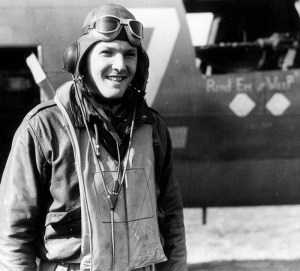 Lt. Beasley’s wingman Lt. Oscar D. O’Neil (father of actress Jennifer O’Neill – Summer of ‘42) and the crew of the 401st squadron’s Invasion II were to be the original subject of Wyler’s film. However, it was also lost on the Bremen mission with all ten of its crew being captured by the Germans. Wyler then turned to the 91st’s B-17 Memphis Belle as the focus of his film. Wyler’s film is in fact a distillation of many planes and crews that ultimately were symbolized into that of the “mythical” plane and crew, the Memphis Belle. In 2019 the acclaimed documentary The Cold Blue was released with digitally restored Wyler footage. Currently, Steven Spielberg is adapting the book Masters of the Air as the final installment of his WWII trilogy which includes Band of Brothers and The Pacific.  The interest in the US 8th Air Force’s early bomber campaign endures nearly 80 years since the historic events.

Harold Harper Beasley was born in Red Level, Alabama, on December 10, 1916, to William Frank Beasley and Lola Mae (Harper) Beasley. He had one older sister, Christine, and one younger sister, Annie Ruth. He attended Andalusia public schools and graduated from Andalusia High School in 1936. He then attended Alabama Polytechnic Institute in Auburn. In 1939 he earned a bachelor of science degree in textile engineering. While in college he was a member of the marching band and the Army ROTC program.  On July 12, 1941, he enlisted as an aviation cadet in the U.S. Army Air Forces. Public records also show that on May 10, 1942, in Walton County, Florida, he married Helen Elizabeth Hereford (1925-1991) of Sarasota, Florida.

Beasley was among the first US B-17 groups that arrived in England in the summer and fall of 1942 to begin small-scale raids against targets in German-occupied countries. Soon the unescorted bomber flew deeper into Germany itself and American losses greatly increased. By 1944, the 8th AF would have more than 2,000 bombers with which to launch raids against Hitler’s Germany. But in the fall of 1942 and early 1943, four “pioneer” B-17 bomb groups with a strength of around only 150 planes and two B-24 groups carried out the 8th’s mission.  In this early period, the odds of surviving the 25 required missions to return home were extremely dismal.

The “pioneer” groups were attempting to validate the U.S. doctrine of high-altitude precision daylight bombing. Whereas the British RAF concentrated its efforts at night at low altitudes, the addition of the U.S. day efforts would allow “around-the-clock bombing”. The crews were also fighting a new type of warfare 20,000 feet up in unpressurized airplanes. Frostbite and hypoxia were constant dangers and killed many airmen. The crew were also only protected by thin sheets of aluminum from the nightmare Nazi flak and fighters. Their war was also uniquely different than most GIs or sailors. If they survived the day’s mission it might have seen them fly to Germany and be back in England in time to get to nearby London for an evening on the town. Scant consolation for the harrowing trips and friends lost on the missions. 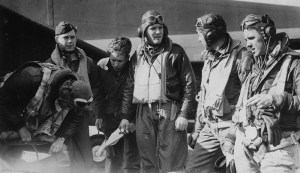 On January 27, 1943, Beasley flew the B-17 Royal Flush! on his fifth mission and the first U.S. bombing raid of Germany proper against the port city of Wilhelmshaven. The Wilhelmshaven raid features prominently in the 1949 classic film 12 O’Clock High starring Gregory Peck.  Other missions Beasley flew were against German U-boat pens in the French Bay of Biscay such as Saint-Nazaire, Lorient, and Brest; German airfields in occupied France such as Abbeville; and industrial targets in Rotterdam, Paris, and Antwerp. Beasley and his crew were mentioned in U.S. radio and print reports of the time, particularly in the downing of several German fighters by their B-17s’ guns. Beasley’s B-17 was shot up on the April 4 mission to Paris and he would pilot a new B-17G Thunderbird.

On April 17, 1943, 8th AF mission No. 52 was the first raid on the German Focke-Wulf fighter factory at Bremen. The mission was the first U.S. hundred-bomber raid and would be the deadliest mission to date. Of the 115 aircraft that launched that day the 91st BG contributed 36 aircraft, its largest sortie to date. One hundred and seven of the B-17s made it to the targets, but 16 did not return to base that day. Beasley’s squadron, the 401st, provided nine bombers that day. One plane aborted and of the remaining eight 401st B-17s, six were lost to German fighters and flak after dropping their bombs and returning toward England. The 401st was in the unenviable “low squadron” position of the formation and most vulnerable to enemy attack. An account of the Bremen mission and the deadly return to England is also chronicled in the research and writings of Dr. Lowell L. Getz, an animal biologist at the University of Illinois as well as 91st Bomb Group historian.

According to Dr. Getz, Beasley’s aircraft Thunderbird suffered direct flak hits shortly after the turn away from the target. When realizing the plane was mortally hit, Lt. Beasley rang the bail-out bell, and the crew began to regress from the plane. As the fire grew, Beasley and copilot 1st Lt. Walter McClain remained in their seats to ensure the rest of the crew had escaped the plane. Enemy fighters viciously attacked the wounded bomber as it lurched downward into a fatal spin. Beasley and McClain’s bodies were found inside the wreckage by the Germans and interned in a nearby church cemetery. After the war Beasley and McClain’s remains were returned stateside. A memorial service for Beasley was held on May 26, 1949, and he was reburied in the Andalusia Memorial Cemetery. Beasley was awarded the Distinguished Flying Cross for his final actions over Germany.

If you have information concerning Lt. Beasley, please contact the Covington Veterans Foundation at covvets@gmail.com.