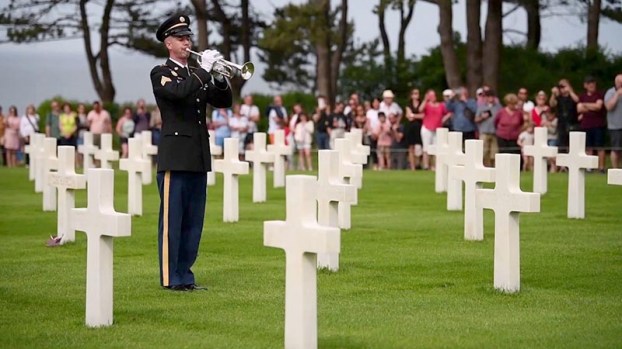 June 6, 2021 marks the 77th anniversary of D-Day, the invasion of Normandy during WW II.

Operation Overlord, the code-name for the invasion, was the largest amphibious invasion in history at that time. The initial Allied plans [Operation Sledgehammer] were to invade northwestern ports in France as early as 1943. Discussions between President Roosevelt and British Prime Minister Churchill resulted in a delay of the 1943 invasion of Europe in favor of an invasion of North Africa, called Operation Torch. Churchill convinced Roosevelt that an invasion of North Africa, followed by an attack against “the soft underbelly” of Europe through Italy, would give the Allies a better chance of success. 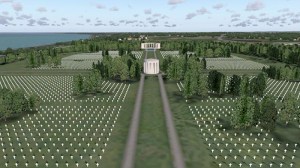 Planning for the Normandy Invasion began in late 1943 and early 1944. The logistics for such a complex operation required many months of planning by thousands of Allied personnel. The distance across the English Channel from the staging area at Portsmouth, England, to the beaches of Normandy was about 100 miles.

To understand the complexity of the largest amphibious invasion in history, you must look at the numbers:

• 6,939 ships were used to transport men and equipment

• 7 million tons of supplies were shipped

Such a massive operation required the utmost secrecy and deception in order to be successful.

In his book, “Bodyguard of Lies,” Anthony Cave Brown writes about Prime Minister Churchill’s “obsession with secrecy and deception.” The title of his book comes from a famous Churchill quote:

“In wartime, truth is so precious that she should      always be attended by a bodyguard of lies.”

The deceptions used by the Allies were many. The most prominent deception took place under Operation Fortitude. To make the plan believable, Gen. George Patton set up a fake army in East Anglia, in the southeast corner of England.  This was the narrowest point in the channel across from the French port of Calais. The sole purpose of Operation Fortitude was to convince Hitler that the allied invasion would take place at Calais. Patton’s 23rd Headquarters Special Troops and his 1st U.S. Army Group South [FUSAG] were actual troops that would later become a part of British Gen. Bernard Montgomery’s invasion force. Fake equipment was produced by some of England’s best design studios and was used to simulate the arrival of tanks, guns and aircraft. In the buildup for the actual invasion, the Allies produced a scripted, eight-inch thick book of radio transmissions to simulate the radio traffic that would precede an actual invasion. The Allies also used double agents to further convince the Germans that Calais was the target.

Two months before D-Day, Allied forces conducted a dress rehearsal for the Normandy landings on an evacuated English beach. Exercise Tiger was a disaster. The Germans learned of the mock-invasion and sent their torpedo boats to attack the landing ships. More than 749 U.S. troops lost their lives during the exercise. Many of the survivors, who were later part of the Normandy landings, described the rehearsal as more terrifying than D-Day itself.

Even though troops and supplies were in place by May, bad weather delayed the start of the invasion. Gen. Dwight Eisenhower, Supreme Allied Commander in charge of Overlord, decided that the launch date would be June 6. The weather was still rough on June 5 but Gen. Eisenhower’s meteorologists suggested that it would clear up by the 6th. On June 5, more than 1,000 British bombers dropped more than 5,000 tons of bombs on Nazi gun batteries along the coast near Normandy to soften up the German defenses.

In 1943, Hitler assigned Field Marshall Erwin Rommel the task of fortifying the invasion beaches along the French coast. Prior to the Allied invasion, Rommel had completed construction of his Atlantic Wall, the 2,400-mile-long line of bunkers and landmines, that included beach and water obstacles. Some estimates put the number of landmines at more than four million.

In the early hours of June 6, paratrooper units from the 82nd and 101st U.S. Airborne Divisions were dispatched to land behind the lines, inland of the invasion beaches. Preceding them were elite Pathfinder Units who were to light the landing areas for gliders and mark landing sites for the paratroopers. The invasion beaches were divided as follows: the British and Canadians were named Gold, Juno and Sword while U.S. beaches were named Utah and Omaha. The amphibious invasions began at 6:30am. Because of the surprise location, the landings at Gold, Juno, Sword and Utah were met with only light opposition. The landing at Omaha met with heavy resistance and there were more than 2,000 American casualties the first day. However, by day’s end, more than 156,000 troops had come ashore at Normandy. There was a high casualty rate among the gliders that landed troops inland of the beaches. Mass confusion during the operation’s early low-light hours, combined with the fact that the Germans had flooded many of the landing fields, created a deadly reception for the glider troops.

We know of two young men with Covington County connections who took part in Allied operations on D-Day. 1st Lt. Thomas Dwight Teel, from Opp, Alabama, flew six sorties on D-Day, his first day of combat. Teel flew the P-47 Thunderbolt with the 356th Fighter Group. Sadly, he was lost on a mission over France and Germany in Late August 1944.

SC3 Claude Pike, longtime resident of Andalusia, Alabama, was aboard the Navy LST-543 on D-Day as his ship ferried British troops to Juno beach. Claude’s battle station was a 40mm antiaircraft gun. The LST later brought troops to Omaha beach before it was beached by a large gale. After 19 days, the LST was refloated and eventually made 23 round trips from England to Normandy.

There is evidence that Pvt. Grady C. Colvin from Opp, Alabama, was part of the D-Day invasion. He served with the 741st Tank Battalion which went ashore on D-Day. Colvin’s body was pulled from the English Channel on June 26 and given a burial at-sea.

Operation Neptune was the naval component of Overlord. Besides transporting the invasion troops across the channel, the navies had to conduct mine-sweeping operations ahead of the transports. Before the landings, Navy battleships, cruisers and destroyers bombarded the German coastal fortifications and inland supply depots. The Navy landing craft that carried amphibious troops ashore were used to transport the wounded back to larger ships for treatment.

Allied air power was almost unchallenged and bombers were able to take out key bridges, forcing German troops and armor to make long detours getting to the front. Overwhelming Allied air superiority was a major factor in the success of Overlord.

Five days after D-Day, on June 11, artificial floating harbors called Mulberries were towed from England and installed along the invasion beaches to facilitate the unloading of more men, equipment and supplies. By then, the beaches were fully secured and more than 326,000 troops, 50,000 vehicles and more than 100,000 tons of supplies had been brought ashore. Before the war was over, more than 2.5 million men, 500,000 vehicles and 4 million tons of supplies had crossed the temporary harbors.

Confusion among the German High Command helped the Allies during the early hours of the invasion. On the day of the invasion, Rommel was visiting his wife in Germany while several senior commanders were also away from their posts. Hitler was late to rise that morning and his aides were reluctant to awaken him, fearing that the first reports were false alarms. Operation Fortitude had been such a success, that even after learning of the invasion, Hitler remained convinced that Normandy was merely a feint and that the real invasion would come later at Calais. Hitler was so convinced that Calais was the primary invasion site that he kept many German divisions in reserve until July.

A crucial factor for Allied success at Normandy was the almost total absence of German air and sea power. During the build-up for D-Day, the British Bomber Command along with the U.S. 8th Air Force had continuously sent large bomber strikes deep into Germany in an effort to tease the German fighters into combat against the superior Allied numbers. By the time D-Day took place, the German Luftwaffe had been so weakened that it could not mount much of an air attack. Allied air superiority was so great that Gen. Eisenhower confidently told his D-Day troops, “If you see fighting aircraft over you, they will be ours.”

The German Navy, or Kriegsmarine, was limited to a few attacks by U-boats. The surface fleet had been so decimated that no capital ships were left and what ships that were available were too small and underpowered to take on the Allied fleet. Some U-boats tried to deploy during the night of June 6, but were beaten back with the loss of two submarines and another four severely damaged. Allied planes were able to hunt down the U-boats, even at night, because of radar. Only those U-boats with snorkels [a special tube that could be raised to the surface so that the diesel engines could operate while the ship was submerged] were a factor and they were few in number. Only 14 U-boats with snorkels were in the area of Normandy because the U-boat fleet had been almost eliminated by Allied navies the previous year. A total of 20 German U-boats were sunk over two months beginning on D-Day. The Allied fleet lost only eight ships during the same time-frame.

The casualty figures used here are from historian Stephen Ambrose. He estimated that more than 4,000 Allied troops lost their live on D-Day. The U.S. Army counted 1,465 killed, 1,928 missing and 6,603 wounded. The after-action report [as of July 1] of the U.S. Army VII Corps counted 2,811 killed, 5,665 missing, 79 prisoners and 13,564 wounded. Canadian forces counted 9,465 casualties including 335 killed. British forces were not published but there were estimates of 2,500-3,000 casualties. German losses are a little more difficult to find. They are estimated at between 4,000 and 9,000 casualties total on D-Day. For the entire month of June, Field Marshall Rommel listed some 250,000 casualties including 28 generals. For the entire period covered by Overlord, from June 6 to Aug 30, Allied casualties were estimated at 209,000 while German casualties were estimated at 216,000. The Allies also captured more than 200,000 German prisoners.

Allied troops had reached the Seine River by August 1944 and Paris had been liberated. The entire Normandy operation was both a tactical as well as psychological blow to the Nazis. Hitler was forced to keep his forces in France and thus not able to send them to the Eastern Front to combat the Soviet troops advancing into Germany. The advance of the Allies from the West and the Soviets from the East spelled the end of Hitler and Nazi Germany. On May 8, 1945, Germany unconditionally surrendered to the Allies.