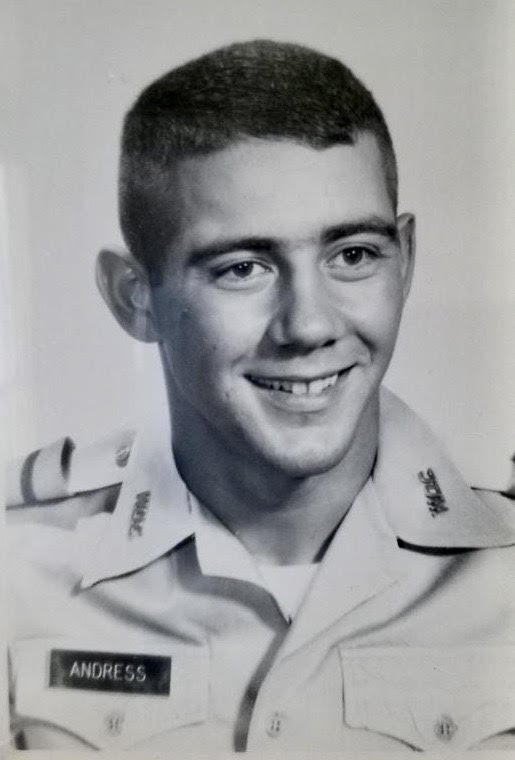 In preparing the story about Mike Andress, the author asked one of his best friends to describe Mike. Charlie Thompson, also from Andalusia, said this, “I knew Mike to be a good son and accomplished athlete. I watched as he became a skilled pilot and an exemplary officer and leader. And he was way too good looking for any man. Was I jealous? I probably should have been but I was not even the slightest. Why? Because Mike could pull all that off with a grace and humility that somehow made me and others feel that we were the special ones. He was respectful and self-effacing with a real servant’s heart when it came to friends, family and country. This heartfelt sentiment from Charlie Thompson encapsulates and summarizes the character and essence of Michael H. ‘Mike’ Andress and reflects the affectionate feelings of others that were interviewed for this article.

Michael H. “Mike” Andress was born on June 23, 1946, in Andalusia, Alabama. His parents were W. R. “Bill” Andress and Erma White Andress. Mike had an older brother, Larry who later served as an officer in the U.S. Navy. Mike grew up in Andalusia and attended East Three Notch Elementary School. It was in Mrs. Smiley’s fourth grade class at East Three Notch School that Mike met a cute young lady named Lucy. Mike graduated from Andalusia High School in 1964.

In high school, Mike participated in several sports but was best known for his hard-hitting play  at linebacker for the Andalusia Bulldog football team. After graduation, he attended Troy State College for a year before joining the Army. At the induction center, Mike met his friend Charlie Thompson and they found out that they had both signed up for flight school and would be going in together. They boarded a bus in Montgomery, Alabama on January 29, 1966 and arrived at Fort Polk, Louisiana some 20 hours later. Charlie remembered, “It wasn’t exactly West Point but the dream was still alive.”

After basic training, both Mike and Charlie were sent to Fort Wolters, Texas for Primary Rotary Wing training and Warrant Officer Candidate School. The combination of primary flight training and warrant officer training was tough but Mike and Charlie completed both and were sent to Fort Rucker, Alabama for Advanced Helicopter Training. Before that happened, Mike got a visit from his parents and that young lady from the fourth grade named Lucy.

With Fort Rucker so near Andalusia, Mike and Charlie were able to visit their parents on weekends and enjoy that “home cooking” again. They often brought their buddies home with them. Charlie said, “Mothers just love to feed men in uniform.” They both received their wings and became Warrant Officers in March 1967.

After a short leave, Mike was sent to Vietnam while Charlie remained in the States for six months. Mike was assigned to fly UH-1B Hueys with the Jokers Gunship Platoon of the 48th Assault Helicopter Company, 1st Aviation Brigade. They were based with II Corps at Ninh Hoa, just north of Nha Trang. Their primary mission was to support the 9th Republic of Korea Division [The White Horse Division].

We have one report of Mike’s operations with the Jokers. He was recommended for an award for the following action on August 24, 1967:

“At 1900 hours on 24 August 1967, a light fire team of the 48th Assault Helicopter Company was performing their dusk patrol when FAC aircraft working for MACV in the Tuy Hoa area in the Republic of Vietnam contacted them that a VC suspect and equipment had been located and requested them to investigate it. After a reconnaissance of the area, Warrant Officer Michael H. Andress, the aircraft commander of the lead aircraft elected to land and recover the equipment. As he landed to recover the equipment, He observed the VC suspect hiding behind a rice paddy dike. He advised the FAC and requested to try and capture him as he might have information concerning the growing VC activity in the local area. As WO Andress took off in pursuit of the suspect, he started running and was observed to be heavily armed. Rather than risk any member of his crew, he put fire on him. He then landed to pick up the wounded suspect and his equipment and flew him to Tuy Hoa North Air Field.  The MACV personnel searched the body and equipment, finding weapons and valuable documents listing all the VC sympathizers, including shop keepers the VC did business with. It was further learned that the suspect was the Liaison Officer for the 95th NVA Battalion for the entire Tuy Hoa area. Because WO Andress captured the suspect, much valuable information was gained concerning the upcoming elections and the locations of the VC and NVA forces, and also who was helping them. Due to WO Andress’ daring and courage in capturing the suspect, the ARVN forces have been greatly aided in their fight against the Viet Cong in the Tuy Hoa area.I strongly recommend that WO Andress be submitted for an award befitting his intrepid actions on the evening of 24 August 1967.

Mike spent over a year with the Jokers Gunship Platoon and the 48th Assault Helicopter Company operating in the Central Highlands of South Vietnam. For his service in Vietnam, he was awarded the Bronze Star, the Air Medal with 21 oak leaf clusters and the Vietnamese Medal for Meritorious Service. Mike returned to the States in April 1968 and was assigned as an instructor pilot, teaching gunship tactics at Fort Rucker. On August 3, 1968, Mike married Lucy Elaine Prestwood [the cute little girl, now lady, from the fourth grade].

On the night of April 14, 1969, Mike, along with another instructor pilot and two student pilots was returning to the heliport at Fort Rucker from a training mission. With marginal weather conditions, they were flying below the clouds with poor visibility when their helicopter struck a large tree. Mike, the other instructor and one of the students were killed. The other student suffered a broken leg and other injuries but survived.

Mike’s good friend, Charlie Thompson was instructing Army aviators at Fort Stewart, Georgia when he got the word. The seven-hour drive back to Andalusia to help bury his friend was filled with shock and disbelief. There were many parallels in their friendship that went all the way back to elementary school. They had made a pact to go to West Point but both settled on military service as an army aviator. They both married Lucys – Charlie married Lucy Newman and Mike married Lucy Prestwood. The fathers of all four were WW II veterans. They had trained in basic together and all the way through advanced helicopter training at Fort Rucker. But then, there was the change when Mike preceded Charlie to Vietnam by six months. Charlie wondered, “Why not me instead of Mike?”

Funeral services were held for CWO2 Michael H “Mike” Andress at the First Baptist Church of Andalusia on April 16, 1969. So many of Mike’s friends from the Army and his hometown packed the church. Burial followed at Covington Memorial Gardens with full military honors. Pallbearers included Mike’s buddy, CWO Charlie Thompson, CWO James H. Thieman, Lester O’Neal, George Gantt, Joe Wallace and Hugh Wilson. Some years later, Mikes body was moved to Mount Zion Cemetery [near the Straughn community] at the request of his family.

The editor of the Andalusia Star-News had this to say about Mike, “There can be nothing very wrong with an America or with a hometown like Andalusia that can produce young men of the character and stripe of Mike Andress.”

Mike’s family established the Mike Andress Sportsmanship Award to be awarded annually to a member of the Andalusia Bulldog football team that exemplified the character, sportsmanship and courage of former linebacker, Mike Andress. The award was discontinued some years ago but Covington Veterans Foundation is working to have it re-instated.

Mike’s friend, Charlie Thompson still remembers their friendship and recalled an incident when they were training at Fort Wolters. While waiting at the heliport, they came across a magazine with the poem, High Flight. The poignancy of the words struck both Mike and Charlie. The poem speaks about the sheer delight and joy of soaring in the clouds…a feeling completely unfamiliar to anyone who hasn’t experienced it firsthand. The message carried special meaning to them both and the poem was shared at Mike’s funeral. In speaking about their friendship, Charlie said this, “It comforts those of us who knew and loved Mike to think that in his final moments, he experienced the final line of the poem and ‘put out his hand and touched the face of God.’”

Note: the author would like to thank Lester O’Neal for asking the author about his friend, Mike Andress. Myers Armstrong [former army helicopter pilot in Vietnam] helped put the author in touch with Charlie Thompson who got up with Larry Andress and Lucy Schliesser. The last three call themselves, Team Andress and they provided the information about Mike. 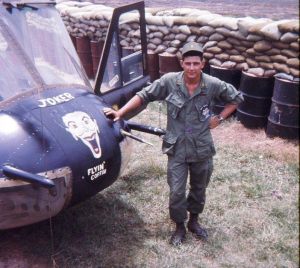 REMEMBER WHEN: Graduate, Clean-Up, Dress Up, Have Fun in 1921