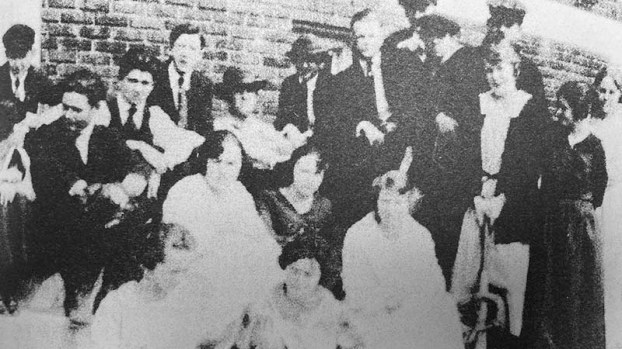 REMEMBER WHEN: Graduate, Clean-Up, Dress Up, Have Fun in 1921

The title of one of the hit songs of 1921, “Ain’t We Got Fun,” puts into words the mood that dominated much of the decade called the “Roaring Twenties.” Automobiles and appliances made the people’s lives more convenient. They also bought things to enhance their newly increased leisure, especially radios, around which millions of families gathered each evening to hear shows. Tickets to movies and sporting events were also a popular pastime. It has been estimated that in the mid 1920s, fifty million people in the United States went to the movie houses every week. Young women dressed and behaved in a bold, modern way and came to symbolize the free-wheeling spirit of the 20s. Andalusia was no exception.

Pictures of fashion began appearing in The Andalusia Star, and women who had become more independent during and after World War I took notice of the ads.

“Sweet girl graduates who have already started to plan their graduation frocks may well take a hint from the styles with beruffled and beribboned dresses of white trimmed with curled ribbon. The dropped shoulder effect is from grandmother’s day and promises to be very popular this season. Dainty white frocks of handkerchief linen with hemstitching added to the bodice are appealing to the young set.”

Girl graduates in this time period wore white dresses and carried bouquets of red roses. Graduation robes, caps and gowns, were not worn until later.

May 3, 1921 – “The Senior Class of the Andalusia High School will present “Hurdy Gurdy Girl,” the delightful three-act comedy. Miss Idalee Riley is coaching the play which will be held at the school auditorium Friday evening May 13.”

May 10, 1921 – “The home of Mr. and Mrs. F. H. Dubose near Andalusia was the scene of a merry party on last Friday evening when the members of the Junior Class of the high school entertained the Seniors. The color scheme of gold and purple, the class colors, was used in an effective manner. The stairway was entwined with Southern Smilax, and the year 1921 was beautifully outlined in roses. Misses Mildred Parker and Miriam Cook served refreshing punch, the table being decorated in roses and burning tapers. Later in the evening while the guests were busily engaged in making their ‘possible history,’ a refreshing ice course was served by Misses Catherine Hill and  Lillian Brawner. It was a happy party indeed and the Juniors will always have a big place in the hearts of the Seniors for giving them such a pleasant evening.”

This writer sees that Senior Tracey Wilder had a part on the program as did Inez Moye, piano soloist. (They later became husband and wife, and Wilder became mayor of Andalusia.)

The Star later reported on May 24, “The Senior Class graduating exercises was held to a capacity audience and was one of high character and gave evidence of much preparation.”

In May 1921, other activities going on in Andalusia were reported in the local newspaper and reported that the town was hopping.

May 2, 1921 – “Quite a number from this section were in Andalusia Saturday to see the horse races at the Fair Grounds.”

May 3, 1921 – “STORY TELLING HOUR – The children of Andalusia between the ages of 9 and 12 years are asked to meet Saturday afternoon at 4 o’clock on Mrs. Henry Opp’s lawn for story telling. Miss Lola Smith will tell the stories at this hour. In case of rain, the children will go to the Methodist Church.”

May 10, 1921 – “The CAMP FIRE GIRLS were entertained at a weekend house party by their guardian, Mrs. T. E. Henderson, in her cottage, ‘Tamara Cottage’ which is near her residence (on E. 3-Notch St.). Mrs. Henderson recently had her cottage remodeled with new porches and a sleeping room which has been added. It is an ideal camping house for the girls. In the evening with the camp fire burning brightly, groups of girls singing to the accompaniment of a ukulele, others dancing to the music of an Edison machine so generously offered by Brown and Broughton (drug store), and from the lattice the Camp Fire flag floating in the breeze – all made a beautiful picture of youth, happiness, and comradeship. Mrs. Henderson is looking forward with keen pleasure to the summer days when there will be other parties at ‘Tamara Cottage.’”

May 17, 1921 – “The MacDowell Music Club will entertain at one of the most brilliant functions, socially and musically, ever had in Andalusia, a silver tea and recital with guest violinist from Montgomery, vocal soloist from Florala, and piano duet performed by Mrs. Lyons and Mrs. Plummer. Let everyone avail themselves of the opportunity of hearing this excellent program at the home of Mrs. C. A. O’Neal on East Three Notch Street on Thursday evening.(The First Baptist Church is now located on this lot.)”

May 27, 1921 – “PARK SOON TO HAVE SIDEWALKS – A survey has already been made for sidewalks which will traverse the park in the center of the square. Work will be started in the next few days. When completed, the park will be one of the show places of Andalusia.”

May 27, 1921 – “HANDKERCHIEF SHOWER – The beautiful lawn surrounding the Carson home on Pleasant Hill was the mecca for a bevy of girls Wednesday morning when Miss Alma Carson entertained in honor of Miss Dorothy Dugger. The guests were invited to the beautifully appointed punch table then asked to write a verse in the ‘Friendship Book.’ Cream and cake were served. Several games were enjoyed such as ‘do this and that.’ Miss Mildred Baisden won the first prize, a dainty powder puff. All enjoyed the kind hospitality of the Carsons. (Note – This home was located on the corner of Montgomery St. and Carson St. John Frank Carson was an Andalusia mayor beginning in 1927.)

May 31, 1921 – “The lawn surrounding the Dr. C. H. Chapman home was the scene of a beautiful festival last Thursday evening when the members of Circle No. 6 of the Baptist Church entertained at a fair with a tent show. Hot dog vendors were pleading cries, and ice cream was sold where the fish pond, blue beard’s wife, the snake eater, the fortune teller, the palm reader, and other attractions drew great crowds. A nice sum was realized for the Baptist pipe organ fund.”

Also in May of 1921 the Andalusia Kiwanis Club was organized with 50 members. The organization was perfected at a meeting held at the new courthouse when officers and board of directors were elected. Albert L. Rankin who was elected president announced that the first luncheon meeting would be held Thursday, May 12. Kiwanians and Rotarians are conferring with a view of organizing a baseball club for Andalusia to take care of some of the nearby teams that seem to be rearing to get at our team.”

A newspaper editorial of the day reads, “That little city goes whole heartedly into anything she undertakes and makes a success of it. She already has a chamber of commerce with 200 members, a good Rotary Club, and now a Kiwanis Club. That is the reason that ‘Piney Woods’ town outgrows its neighbors and is putting herself on the map. We glory in the spunk of her citizens.”

A report was made in the May newspaper of the April Clean-Up Campaign waged by citizens – “Score another for Andalusia. She is today the cleanest town in Alabama. Civic pride can be found in the smallest neighborhoods as in the most fashionable residence section of the city. Yards have been swept. Outhouses were scrupulously cleaned. Vacant lots were cleared of weeds. Not a particle of stagnant water can be found since filled up drains were opened up. Church lots are clean and beautiful. Alley ways and vacant places behind stores have been placed in a perfectly sanitary condition.”

“Whistles blew at six o’clock each morning for everyone to rise and go to work cleaning house, washing windows, sunning beds, cleaning closets and dark corners of accumulated trash, gathering cans, bottles, and rubbish of all kinds ready for the city wagon, scattering lime and tearing down ugly unused outhouses, fencing chickens, pigs, cows, planting flowers in borders and beds, cleaning streets, and urging citizens to swing into line with the spirit of springtime.”

The work was divided up into four wards for cleaning up the city. Committee chairmen were Mrs. S. B. Milligan, Mrs. A. M. Riley, Mrs. J. C. Hill, and Mrs. E. M. Becket.  Mrs. Opp was chairman of the Square Committee. Mrs. Burnett was chairman of the Depot Committee. The Boy Scouts, the Camp Fire Girls, their leaders, Professor L. E. Brown and a band of volunteer school students contributed to the transformation of these places from eyesores to beauty spots in town. Much appreciation was offered to Mr. Lucene Pendrey, Mr. Sidney Waits, Health Officer Dr. R. I. Kearley, Chamber of Commerce Secretary Mr. J. G. Scherf, Mayor T. E. Henderson. Chief of Police Jernigan, Mr. Head, Street Overseer, and all who left their businesses to work with these groups every day. Special thanks were extended to The Andalusia Star for the publicity given through its columns.

As we Remember When in this column, let us be grateful to those citizens 100 years ago, the ones with that “spunk” who

set an example for us today to celebrate the achievements of our school graduates, to enjoy the parties and leisure times similar to the days of old, to work when it is time to make our city a beautiful place to live, and to always have that same spirit that pervades the heart of this South Alabama town.

Sue Bass Wilson, AHS Class of 1965, is a local real estate broker and long-time member of the Covington Historical  Society. She can be reached at suebwilson47@gmail.com.

A Thursday night car crash has claimed the lives of two Opp residents. According to the Alabama Law Enforcement Agency’s... read more