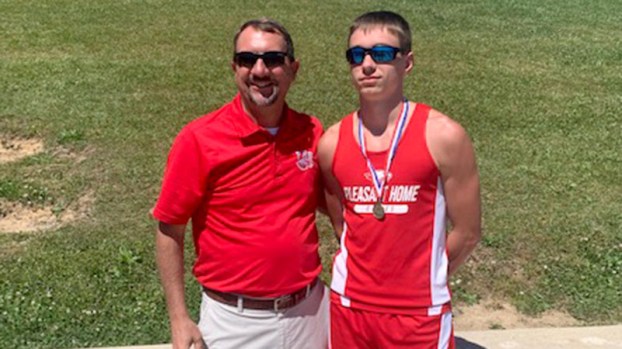 Pleasant Home Track Coach Tony Wilson with Nicholas Holley who won the state championship in the 1A javelin event.

Several members of the Pleasant Home track team placed high at the state meet, including bringing home a state championship in the javelin event. 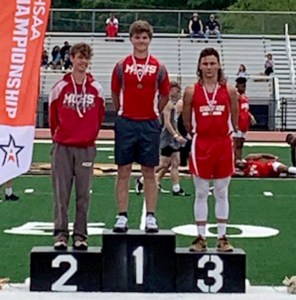 Nicholas Holley, a junior at PHHS, won the gold medal in javelin with a throw of 163.5 feet, earning the 1A state championship.

Colt Hinson, another junior, placed third overall in the pole vault event with a throw that measured 9 feet, earning the bronze medal for 1A.

In the 4×400 relay event, the squad of Holley, Hunter Baldwin, Ty Clark and Ross Wilson finished fourth in the state.

PHHS Athletic Director Marc Tracy said he is proud of the track team’s accomplishments this season and looks forward to seeing the program building upon their success.

“We had a very good showing at the state meet with 10 athletes participating. Track events were canceled last year, so it was great to see them back in action. All but two of our athletes will return next year and will help us continue to build on the successes of the program,” Tracy said.

The state track meet was held April 30 and May 1 in Cullman, Alabama.

Even though the Opp High School Lady Bobcats gave up four runs in the third inning, they still defeated New... read more