Andalusia locals start non-profit to mentor youth of the area

Three Andalusia locals have gotten together with a want to better the community by starting The Lighthouse Initiative of Covington County, a non-profit aimed to mentor children.

L’Derryus Benson, Clark Sanders and Mark Mills knew they wanted to make changes in the community a while ago, but COVID-19 got in the way.

“Whenever COVID-19 started there was a lot going on,” Benson said. “There was a lot of civil unrest going on. So, Clark, myself, Mark and some other guys got together and knew that we wanted to unite the community and make a change. Unfortunately, COVID didn’t let that happen. Andrea Cox had just started her Totes for Shug non-profit and she presented to us and gave us a push to get started with the mentor service.”

After Cox reached out to the group, Sanders knew now was the time.

“We were all just spinning our wheels thinking about what we were going to do,” Sanders said. “Andrea then reached out to us and told us that we needed to throw it out there and make it happen. She said that the community would recognize the need and it will go up from there.”

Over the past year, Benson has been working to recruit men and women to be mentors to children in the community.

“I think we have a good group of guys that are willing to mentor and be that guiding light to the youth,” Benson said. “Of course we want to add to that and add women. Right now, we have the plan in place and about 10 people in place. We are just trying to build that community support and go from there.”

Sanders said they are all hoping the community will guide the group where they need to go.

“I think there is an opportunity to do some unique things,” Sanders said. “We don’t want it to make people uncomfortable with their service and what they can do to help the kids. Most of the time, the kids just need someone to talk to. Whatever it is that that person can give, so long as their heart is in the right place, we are pretty open-ended. I think that is going to allow us to be pretty dynamic to reach people in a little different sense than what folks are used to in a mentorship program. I also think that the unification and the togetherness aspect of it is going to be a really powerful thing to move us forward.”

The overall goal of the non-profit is to work with the youth of the community and help them become the best people they can be.

“First we would talk with the parents and if they think it would be a good thing for their child then they would fill out an application form,” Benson said. “Then they would introduce us to the child and we would learn what they are interested in. We want to build off their strengths and improve their weaknesses. If they are interested in a certain job field, we want to be able to have a certain mentor lined up that is in that career field. We want to be able to continue to build that fondness of that field. We are not trying to be their parents, we are just trying to be another asset in their life.”

Right now, the Lighthouse Initiative of Covington County is searching for mentors, volunteers and donations.

“We want the community in on this,” Benson said. “Whether it be volunteering time or donations. Once we get the funding, we do want to be able to assist kids in different ways. If they need help paying for the ACT, we will be there, for example. If a kid wants to be an astronaut when they grow up, and we have enough money, we want to be able to send them to space camp. We want to be whatever we can be for these kids.”

For anyone interested in becoming a sponsor, mentor or donating, please reach out to The Lighthouse Initiative of Covington County on Facebook, or email the group at Lighthousecovco@gmail.com. 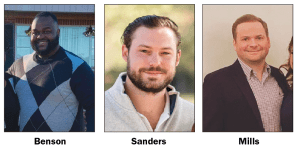 The Covington County Probate Office will be purchasing new election ballot machines that are primarily used to assist those with... read more