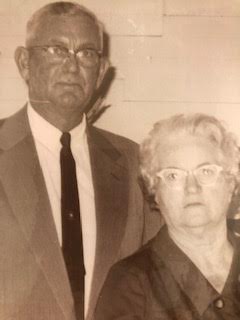 Dorothy (Thomasson) and Willie Henry Lawson made their home in Andalusia

Dorothy Merle Thomasson was the second daughter and sixth child born to Frank and Beulah (Sasser) Thomasson. Family records reveal she was born in 1911 when the family lived on a farm southeast of the Carolina community. She was only two and a half years old when her mother died, but she later said she knew no difference in a natural and a step-mother. She grew up helping her step-mother in the kitchen, especially washing the many dishes, etc., after a big meal prepared for family and crowds of relatives. She attended Carolina School and Cedar Grove Church of Christ.

When Dorothy was approaching 20 years of age, she married Willie Henry Lawson, son of Edward Lawson and Elba Catherine Chavers. They made their home in Andalusia where he  worked as a plumber, and she, or “Doke” as she was known by many, was always a homemaker. She worked some years at Alatex and later sold Blair products. She was respected by all, and memories of her by children and grandchildren are recorded throughout this story.

The oldest daughter, Catherine, and husband, Wayne Tatum, had five children, and a brief review of each follows.

Daughter Brenda Gail Tatum b. 1952, was grad. from AHS and attended LBWJC, m. 1971 Thomas Gary Petty (1951-2021), son of John Wilson Petty and Nina Augusta Radford.  Gary was grad. from AHS, LBWJC and Troy U.  He was on the initial LBW Saints baseball team in 1970. They had two daughters. (1) Tara Dawn Petty, b. 1974 d. 2010, grad. of AHS, LBWJC and Faulkner U.; (2) Ginger Elaine Petty, b. 1978, Grad. AHS, m. (1) 1998 Barry Lee Wilson, had son, Connor Lee Wilson, b. 1999. Connor was grad. From Oak Mountain HS in B’ham and is a jr. at Stetson U. in Deland, Fla. (2) 2011 John Robert Watkins. Ginger has worked in banking for 25 years and is a Mortgage Software Engr./Asst. VP of Fifth Third Bank. She and John established an electronic recycling co., Coastal E-cycle, in Pensacola where they currently reside. Brenda and Gary made their home in Andalusia on Brooklyn Road for 42 years until they moved to Pensacola in 2019. Brenda served as Administrator for Cov. Co. Commission, 1984 until retiring in 2015. Gary worked in the textile industry before serving as Cov. Co. Veterans Ser. Officer for several years before retiring in 2013. Brenda remembers many wonderful attributes of Granny Lawson, specifically her unselfish, Christian values; always thinking of ways to help someone in need; being a wonderful grandmother who enjoyed helping her grandchildren and all the neighborhood children build a bonfire with pecan leaves during the fall and roasting wieners and marshmallows over the flames. She was a true southern “Granny” and was loved by all who knew her.

Son James Harold Tatum b. 1956, was grad. from Ft. Walton Beach HS and joined the Army for a short stint. When his father became disabled, he was discharged to return home and help care for the family. He m. (1) Mary Ellen Phillips (d. 1983), had son, Wayne Alton Tatum, b. 1981 (2) Michelle Leonard, had two sons. He made his living as a plumber and electrician in Cov. Co. until he relocated to Pensacola in 2019. He remembers Granny Lawson’s humble, Christian ways and fun times when he stayed overnight with her.

Son Farrell Wayne Tatum b. 1958, was grad. from Ft. Walton Beach HS, m. (1) 1978 Shirley Jean Lucas and had two sons, Jason Farrell, b. 1980 and Jeb Austin, b. 1983. Jason has a daughter, Kaitlyn Lane, b. 2006.  Jeb m. Leslie Marie Forbus in 2008, has daughter, Bliss Elizabeth, b. 2014. (2) 2016 Julie D. Brown.  Farrell lived most of life in Cov. Co. working for Max Matthews, 1974-1980, then went to the oil industry, working for Zapata/Arethusa/Diamond Offshore Drilling from 1980-2019, until he retired and moved to Hempstead, Tex. He remembers how Granny Lawson would rake pecan tree leaves into a pattern resembling a football field, and also sitting in the old metal furniture on her front porch shelling peas for hours on end.

Daughter Rebecca “Becky” Catherine Tatum, b. 1959, was grad. from Ft. Walton Beach HS and made a career in acct./bookkeeping & off. mngt., m. (1) 1999 James Dobyne, had daughter, Lindsay Tatum Dobyne, b. 2000, who is 2019 grad. of AHS and is soph. at UA majoring in elem. Ed. (2) 2009 Ray Frank Mauldin who is heavy equip. oper., reside in Andalusia area. Her memories of Granny Lawson include her overwhelming desire to take any and everybody, young or old, to church services any time the doors were open.  When she got her driver’s lic. late in life, she could have been known as the “Church Bus Driver.” Another is remembering her baking pies with meringue that she always burned because she never had a timer and would get busy doing something else!

Dorothy’s son, Willie Gerald “Gerry” Lawson, married Martha Carolyn Windham, daughter of James Windham, in 1958 in Andalusia. After high school, he joined the US Navy in 1956 and served until 1960. He then worked with Armstrong Cork Co. in Pensacola for four years before moving to Fremont, Cal., and working with General Motors. In 1967, he moved into mngt. as a supervisor and continued in it until the plant closed in 1982. He next went with a high-tech company, Qume Corp, as a mngr. In 1985, he returned to the auto bus. with Johnson Controls, Inc., as a manufacturing mngr. and retired from it in 2005. He recalled how in his early years his mother dressed them for church and walking to catch the church bus. Her favorite hymn was “The Unclouded Day” which she often heard her mom sing. In 1943 the family moved to a house near the Armory and lived there nine years. In 1951, they moved to Pugh St. where his mother lived out her life. She had a hard life with major tragedies of losing two sons and her husband, having cancer the last two years of her life, but she never lost her faith.

Gerry and Martha are the parents of four sons: Steven Gerald, b. 1959, m Amy Zheng; Christopher Allen, b. 1961, single; Davin Anthony, b. 1962, m. Nicole Colleen Valdez; and Patrick Eric, b. 1971, single. Steven was recruited out of community coll. for the start up of a high-tech co. and has been with Xilinx as software engr. and dept. mngr. for 35 years. Christopher has been with Flex Inc. for 25 years. He and Patrick are single and live with their father. Patrick has an MBA from San Jose St. and has been with Hallmark since he was 17 years of age. Davin was married in 2007 to Nicole Colleen Valdez, daughter of Louis and Maria Valdez. Davin has worked as a security officer for 20+ years, and Nicole has worked 28 years as a preschool teacher. They reside in Tracy, Cal., and are the parents of three children: Teddy Hahn, b. 1998; Nicholas Drax, b. 2000; and Samantha “Sami” Martha, b. 2006. Teddy and Nicholas were Nicole’s children before marrying Davin, but he has helped rear them, and Sami is their daughter.

Mary Jane and Dennis Mills are the parents of two daughters: Donna Michelle, b. 1966, m. 1986 Eddie Dean Armstrong, son of James and Mollie Armstrong; and Christy Denise, b. 1971, m. 1992 Clay Hunter Carter, son of Dewayne and Marjorie Carter. Michelle has a nurs. degree from LBW and GCWCC, and Dean works with Shaw Indus. They have three children: Jared Dean, b. 1986, m. Ashley Nicole Williamson, has son, Judson Drew; Cole Dalton, b. 1991, m. Kaci Nicole McCallister; and Brentley Dorothy, b. 1998, m. Steven Tucker Lawless. Christy has a BS in bus. from TSU and works as bookkeeper at Straughn Sch., and Clay works with PowerSouth. They have two children: Cale Dayton, b. 1997, electronics degree from LBWCC and works as research tech at Eglin AF Base; and Callie Dawson, b. 2003, junior at Straughn School. In 2008, Mary Jane married James Terry Sharpe, s/o Terry Eugene and Merel Sharpe. He is self-employed, and she is retired after 23 years at Alatex and 23 at Shaw Industries. They reside in Gantt.

Michelle and Christy’s memories of Granny include how she loved her family with her whole heart and made them feel so loved, how she led an exemplary Christian life seeing the good in everyone, and how she was an amazing cook, houseplant grower, and taught her children and grandchildren homemaking skills. An enjoyable hobby was collecting salt and pepper shakers.

Charles Esker “Charlie” Thomasson was the fourth son born to Frank and Beulah (Sasser) Thomasson. He was born in Covington... read more