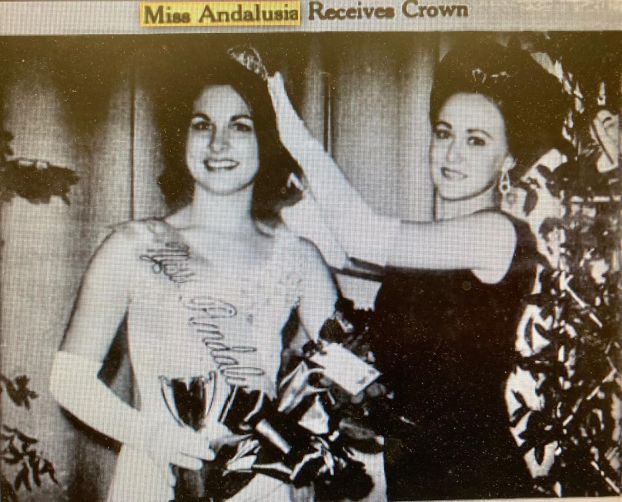 As far back as is the news about beauty queens published in The Andalusia Star News, I find that the “Miss Andalusia” contest started in 1952. Staged and sponsored by the Coterie Club, the review was held at the downtown Martin Theatre. Contestants would gather at the canteen on Burnett Street in their evening dresses. Each group would be called over to enter through the back double doors of the theatre and walk across the stage when their name was called. The audience was always filled to capacity.

April 3, 1952 – “Miss Jo Ann Findley was chosen ”Miss Andalusia” in the beauty contest Friday night March 28 on the stage of the Martin Theatre. Miss Findley, daughter of Mr. and Mrs. Carl Findley of River Falls Street, was presented an armful of red roses and was picked by a panel of judges as the most outstanding of seventy-seven beauties.”

The pageant began being staged in 1966 in the new AHS auditorium completed in December 1963. Nancy Williams was chosen as “Miss Andalusia” that year (1966) and in 1967 Judy Stokes won the title.

In the fall of 1966, English teacher Mr. Joe Wingard started his 39-year teaching career at AHS. When journalism teacher Miss Patricia Seymour left AHS to go pursue her master’s degree at the University of Alabama, Wingard became the Andy Hi-Lite sponsor and later the Memolusia advisor after Curtis Thomasson who served for four years, Mrs. Arlene Nettles before him.

Mr. Dan Shehan came to teach at AHS in the fall of 1967. Somewhere in that time frame (1968-1973), the Memolusia beauties were chosen by a vote of the student body. So there were top beauties in the senior, junior, sophomore, and freshmen classes.

In 1986 Wingard and Shehan wrote a song together for the “Miss Memolusia” pageant in 1986 (Copyright date, September 19, 1986). “…Oh, lovely, Miss Memolusia, Filling all of us with memories!” This song has been used off and on through the years at that occasion. Knowing both gentlemen as well as I did, I believe that the school established the “Miss Memolusia” contest at the direction of Wingard and Shehan. If any teacher or student living knows any different, please let it be known.

The “first” “Miss Memolusia” shown in the yearbook was in the year 1974 when Stephanie Morgan won the title. Prior to that “Top Memolusia Beauties” were 1968 Katherine Anthony and Loye Zeanah; 1969 Peggy Hare and Nancy Sikes; 1970 Dottie Pippin; 1971 Mel King; 1972 Debbie Pebworth; 1973 Suzy Parker. The nominees were selected by popular student vote followed a few years down the line by a panel of out-of-town judges who met and observed the contestants during a tea held prior to the participants being presented in formal attire at which time several were selected to reign as Memolusia beauties, two from each class of ninth through twelfth graders.

These capable teachers became the sponsors of the “Miss Memolusia” pageant each year with creative themes and elaborate stage decorations and lighting which always enhances the magnificence of the contestants’ beautiful and stylish formal gowns.

Live piano music was used for a number of years but with the convenience of technology and modern sound systems, recorded music has been featured in recent years.

In 1977, the use of “escorts” appeared in the yearbook with classmate guys donned in white dinner jackets who led the contestants onto the stage. During Mrs. Spurlin’s sponsorship, around 1990 she introduced the escorts attired in black tuxedos which has been the highlight of the pageant ever since especially when the guys perform on stage while the judges are deliberating.  The tuxedo men choreograph their own dance routine – now a favorite tradition. MC’s chosen each year from the Memolusia staff narrate the pageant. Other staff members work behind stage.

An interesting article appeared in The Andalusia Star News in March 1961 – “MARCH OF BEAUTIES – What becomes of the young ladies who win the coveted title of “Miss Andalusia?” This Coterie Club beauty competition embraces the past nine years. The three most recent beauty queens are now married. A proper conclusion: ‘Win that Miss Andy crown and capture a husband.’ With such a slogan, is there any wonder there are more than 65 candidates in this year’s event?”

All of the young ladies who were “Miss Andalusia” and “Miss Memolusia” were outstanding in various ways and went on to great successes in life. One in particular whom I will note won national prominence in beauty. “Miss Andalusia” of 1958 was Katy Sue Meredith now known as Mrs. Ashton Wells, Sr. In 1963 she became the “Covington Maid of Cotton,” the “Alabama Maid of Cotton,” and the “National Maid of Cotton.” Andalusians were so proud that a large billboard appeared on East Three Notch Street at the edge of town with her likeness and a message of congratulations.  If I remember, it was there until it faded.

Katy Sue won an entire wardrobe of cotton apparel which she modeled in fashion shows locally and around the country during her reign. She is still as charming as ever and “Miss Andalusia” in my boat as we Remember When beauty contests and the significant experience and opportunities the girls gain from their time on the stage.

Congratulations to Miss Audrey Danford who just the other day won the title of “Miss Memolusia” for 2021. Another time, another column we may feature the 1981-2020 “lovely Miss Memolusia” beauty queens of long tradition that filled so many of us with memories.

Sue Bass Wilson, AHS Class of 1965, is a local real estate broker and long-time member of the Covington Historical  Society. She can be reached at suebwilson47@gmail.com. 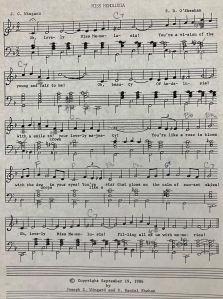 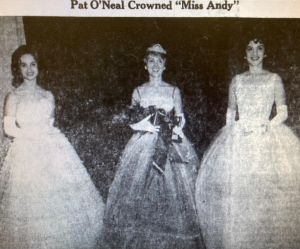 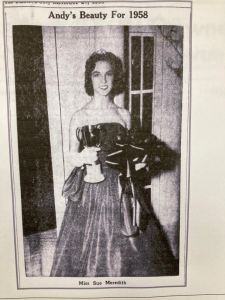 REMEMBER WHEN: A LOCAL DREAM FULFILLED

An interesting visitor came to see me recently and brought some information about the Mason Serenity House and the story... read more