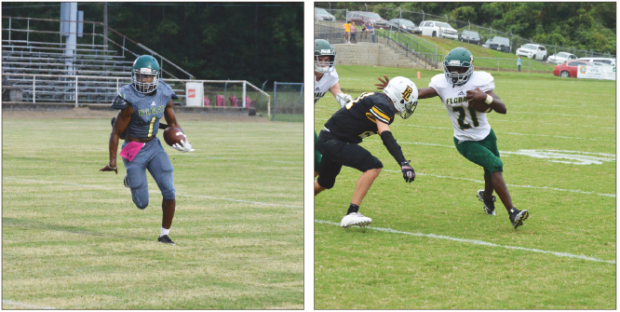 Florala High School seniors Rashaad Coleman and Zacchaeus Reese have been nominated for the 2020 Alabama Sports Writers Association’s Class 1A Back and Lineman of the Year.

“Being a finalist is a huge honor,” Littleton said. “As coaches, we had to nominate the players. I really thought that Rashaad had a chance to get it and I knew that Zacchaeus definitely deserved the nomination I just didn’t know how his competition would stack up against him. It wasn’t a shock when they announced it. Now we just have to wait.”

Throughout the football season, Littleton said both players stepped up to the plate to be the leaders he needed.

“Both of these guys were big-time leaders for us,” Littleton said. “We spent a lot of time with both of them, whether it was film, practice or anything. Zacchaeus spent a tremendous amount of time with Coach Greene our defensive coordinator. There were a lot of hours that these guys put in. We knew going into the season that our offense would circulate through Rashaad. He had a lot of good weapons and a lot of good targets to throw to in Anthone Stone, who was also an All-State receiver, Zane Weeks and Austin Howell.”

The winners of the Back and Lineman of the Year will be determined at a later date.

The team is selected through nominations from statewide coaches and voted on by members of the ASWA prep committee, which... read more