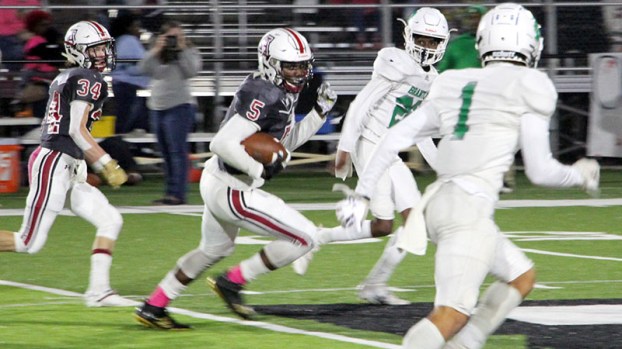 In the regular season finale, the Andalusia Bulldogs played host to the Brantley Bulldogs in a last-season addition to the schedule. The game stayed close through much of the first half, but Andalusia began to pull away, ultimately scoring a 41-19 victory.

The Andalusia defense got things off to a good start as consecutive sacks — the first by Gage Theus and the second by Chip Morgan, Brandon Gurley and Chase Harper — led to a Brantley punt from the end zone.

From midfield, Omare Latimer picked 15 yards out of the backfield. From the 40-yard line, quarterback Jake Wilson spotted an opening through the middle of the field and ran the ball in for the first score. Theus hit the PAT to give Andalusia a 7-0 lead. 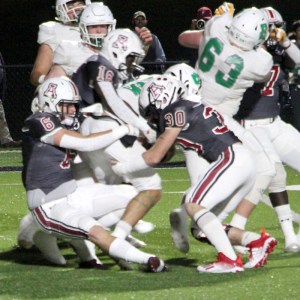 Chip Morgan, Brandon Gurley and Chase Harper combine for a sack early in the game.

Brantley answered quickly, as Robert Shine broke several tackles on his way to a 49-yard touchdown run to tie the game at seven.

Andalusia took only four plays to retake the lead, following a good kickoff return to the Brantley 44-yard line. From the 19, Wilson found Caleb Blackmon open for the score to take a 14-7 lead.

The two Bulldog squads battled back-and-forth for the remainder of the first and well into the second quarter. With 3:51 to go in the half, Andalusia increased its lead. Two big runs of 38 and 19 yard by Michael Hourel helped lead to a 3-yard touchdown by Josh Gurley. Theus’ point-after made the score 21-7.

Andalusia got the ball back with under a minute to go in the half, ultimately adding to the lead with a 49-yard field goal by Theus as time expired, to take a 24-7 lead into the half.

To open the second half, the Brantley defense made consecutive tackles in the backfield to back Andalusia up, but Latimer bailed the Bulldogs out with a big 25-yard run on third-and-19. Andalusia would drive into Brantley territory, setting up a 38-yard field goal by Theus, making the score 27-7.

Brantley would follow with a long drive of their own, scoring on a 20-yard pass with 4:37 left to go in the third. The point-after was blocked, making the score 27-13.

Brantley’s hope for a comeback took a big hit a few plays later when Wilson found Isaiah Brundidge on a slant for a 60-yard touchdown leading to a 34-13.

Each team would score late in the fourth, including a 4-yard run by Latimer that put Andalusia ahead 41-13. Brantley’s final score came in the final minute of play.

Leading the Bulldogs on offense was Hourel who picked up 109 total yards while Josh Gurley picked up 91 yards.

Wilson went 9-for-12 for 165 yards and two touchdowns at the quarterback position.

As the runner-up in 5A’s Region 2, Andalusia will host Marbury High School in the first round of the state playoffs on Friday, Nov. 6. Marbury finished the regular season at 6-4 with a 3-3 record in 5A Region 3.

(Editor’s Note: This story has been corrected from its original version. It was first reported that Andalusia was the champions of Region 2; however, Pike Road is the champion and Andalusia is the runner-up. We apologize for this error.)

The Florala Wildcats varsity football team (7-2, 4-2) started off strong, but could not hold off the undefeated Brantley Bulldogs... read more