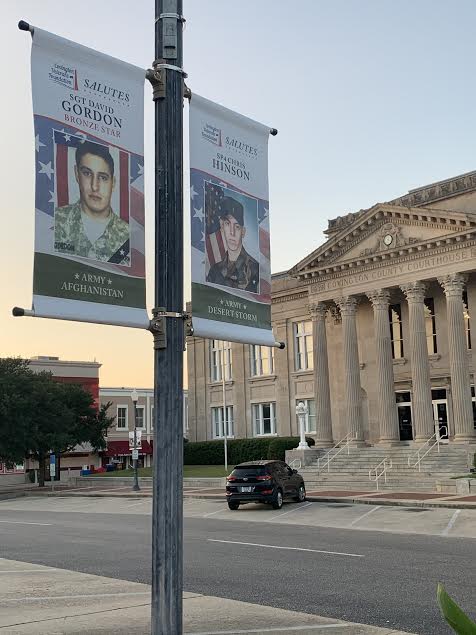 To honor the veterans of Covington County, over 300 banners will be displayed on the square over the next two weeks. The Covington Veterans Association is a nonprofit foundation created to honor veterans and their families in Covington County, said board President Ben Bowden.

“We do this to memorialize the service of Covington County veterans,” Bowden said. “We have had several projects, last year before we had to worry about the coronavirus we had an afternoon of patriotic presentations and singing and things of that nature around Veterans Day. We had to skip it this year, but we hope to do it again next year.”

The banner project is an effort to celebrate or honor veterans who are from the county or have ties to the area, as well as active duty service members. The banners will have photos of the veterans and will be displayed on lampposts around the courthouse and surrounding streets, Bowden said.

“The banner project is an effort to celebrate or honor [them] by getting a picture around the courthouse square in Andalusia for the week leading up to Veterans Day and the week of,” Bowden said. “Each banner represents a veteran and they will have a picture. If they were in an armed conflict like the Vietnam War or if they received an honor of some kind, it would also be on the banner.

Bowden said the banners are sponsored by the families of the veterans each year. Although the submissions are already closed for this year, Bowden said it is open to the public and will reopen next year.

“They bring us the photos and we create the banners. Robert Evers lays out the banners and sends them off to be printed,” Bowden said. “We had about 250 last year and have added 75 this year, so there are over 300 now. They are veterans all over the county, not just in Andalusia.”

The Covington Veterans Foundation is a project by John Vick, who has been honoring veterans for a long time, Bowden said.

“He decided we needed an organization to honor the veterans and he is the heart and soul of it,” Bowden said. “John Vick has done a lot of work with this.”

Not only is Bowden the president of the board of directors, he has also served in the Air Force. “I joined the Air Force right out of law school for five years and served in Operation Iraqi Freedom and Operation Enduring Freedom,” Bowden said. I’ve been on the reserves since then.”

The City of Andalusia has been an important partner to the foundation, according to Bowden. “They give us space on their lampposts and they also purchase the brackets that they sit on and put them up for us,” Bowden said. “It would be impossible to do without the city and the mayor’s assistance. We also had help from Michele Gerlach, she was responsible for sales and getting that straight.”

This will be the second year that the banners will be displayed in Andalusia, Bowden said. “There’re a lot of noteworthy veterans and we are happy to get them up and see what a patriotic community Covington County is,” Bowden said. “Each represents a family that wanted to honor a veteran and it shows how we feel about honoring veterans. It’s a great outpouring of support and we will be opening it again next year as well.”

May 24, 2019 will always be a day that former teacher Jill Bryant will remember. “It was the day of... read more