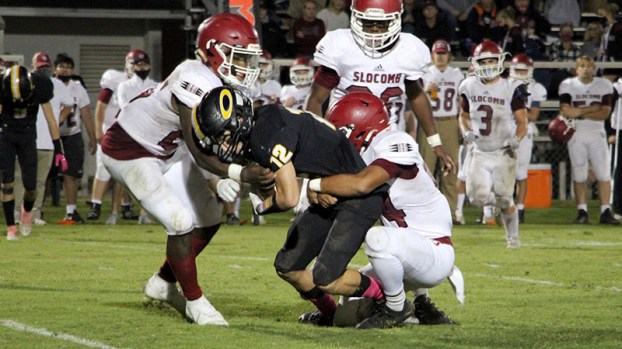 Jackson Pierce drives to pick up extra yardage for the Opp Wildcats.

In a battle to determine the frontrunner in 3A’s Region 2, the Opp Bobcats took early control, but turnovers helped the Slocomb Red Dots come back and ultimately earn the victory, 38-27.

The loss puts the Bobcats at 5-1 in region play while Slocomb stands atop Region 2 with a record of 5-0 with their last region contest against Wicksburg next week. Opp has completed region play. 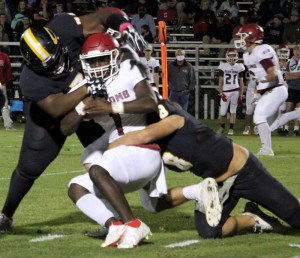 Rasean Dawson and Cole Jennings make a stop for the Wildcats.

On Friday night, the Bobcat air attack was hitting its stride early. A big play set the team up at the 25-yard line on its first possession and from there quarterback Hal Smithart hit ZaZa Lindsey for the score to take a 6-0 lead less than a minute into the game.

A sack by Jesse Coon helped pave the way for a quick three-and-out for the  Red Dot offense.

Taking possession at their own 29 following the punt, Smithart once again found Lindsey for a key play on third down to maintain possession. The Wildcats would drive to the Slocomb 16-yard line where consecutive passes to Lindsey put the ball at the 1-yard line. From there, Smithart powered his way into the end zone. A two-point conversion attempt failed, but Opp held a 12-0 lead with 2:53 to go in the first quarter.

From their own 15, Slocomb would help out the Bobcats with a fumble in the backfield that was recovered by Lindsey right at the goal line. But, a penalty and sack backed the Wildcats all the way to the 19. They got 15 yards back on a pass to Gray Jennings, but had to settle for the field goal and a 15-0 lead going into the second quarter. 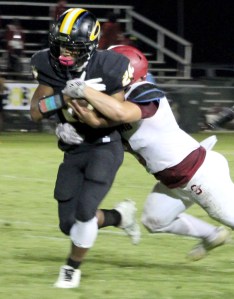 Slocomb would get on the scoreboard with 4:33 to go in the first half on a big 37-yard touchdown run by Jaylen Nobles. The point-after was good, cutting the lead to 15-7.

An interception would give the Red Dots another chance before the end of the half and they capitalized with a 51-yard touchdown pass with 39 seconds to go, making the halftime score 15-14.

The Red Dots continued their comeback following their second interception of the game, which led to a 3-yard score by Rashawn Miller. Dawson Hill followed with a run into the end zone for the two-point conversion, giving Slocomb its first lead of the game, 22-15.

The score did not change until just under 10 minutes to go in the fourth when Slocomb appeared to be pulling away as Jaylen Nobles weaved his way through the Wildcat defense for a 53-yard touchdown. The point-after put the Dots ahead, 29-15.

With time on the clock, Opp continued to push and was able to score its first points since the first quarter with 6:56 to go in the game. The score came when Smithart found Jackson Pierce in the end zone from 24 yards out. The point-after attempt failed, but the lead was cut to eight points, 29-21. 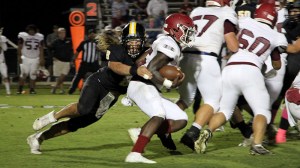 Cole Jennings gets into the backfield to make the stop.

Slocomb came away with a field goal on its next possession to lift its lead to 32-21.

As Opp took possession at its 35 with just over 4 minutes to go, a few first downs and a personal foul penalty suddenly put them at the Red Dot 17 where Smithart connected with Will Spurlin for the score. A two-point conversion attempt failed, but the Bobcats still had a chance with 2:16 on the clock.

The onside kick was mishandled by the Red Dots as Dakota Cornelius came away with the recover for the Bobcats, giving them possession near midfield.

The hope for late dramatics ended fairly quickly though, as a penalty and consecutive sacks backed the Bobcats up to the 11. On fourth-down and very long, the Bobcat pass was intercepted by Slocomb and returned for a touchdown, sealing their victory, 38.27.