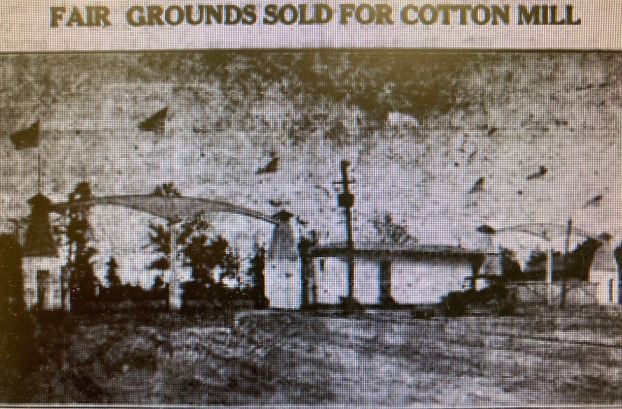 With the approaching Covington County Fair in October sponsored by the Andalusia Kiwanis Club, I wanted to look  back at the beginning years of the county fairs in Covington which I wrote about in last week’s column. In my routine research of the old local newspapers Covington’s First County Fair was in November 1916 held right downtown on the Public Square and was “put on” by the ladies’ Civic Improvement Club as was suggested by its president Mrs. Oscar M. Dugger, Jr. the newspaper editor’s wife. It was a successful daytime event culminating with a Sacred Harp singing in the “new” courthouse.

In browsing the newspapers in the Fall of each year after that, harvest time and gathering of the crops was an important time here in South Alabama. After much work on the farm, the farmers and their families were eager to display examples of their produce, poultry, hogs, and cattle. Schools and individuals were also proud to feature booths with children’s artwork and citizens’ floral arrangements, handiwork, pastries, and canned goods. Business houses looked forward to sponsoring booths to promote their products.

Just where that fair was held most every year after that, I am still trying to confirm those locations which can be a little confusing. World War I interrupted the event that would eventually become an annual occasion. If anyone living who was around back then can help me out, I will be pleased. Here we go – from accounts in The Andalusia Star!

April 1920 – “Covington County’s Fair is now assured with the purchase of a 60-acre tract for the grounds. The site is near the Swift Packing plant. The grounds are suitable for the buildings, race track, ballpark, etc. J. L. Thweat, former Trojan, now manager of Swift & Co., J. G. Scherf, and an architect are this week visiting Troy, Dothan, and Moultrie, Georgia to look over their fair grounds.”

July 30, 1920 – “E. R. Merrill, O. L. Benson, T. G. Conner, and S. B. Milligan spent Tuesday in Dothan looking over their fair ground buildings. To keep up with other progressive towns, Andalusia has organized a fifty thousand dollar Fair Association. Work on the buildings and grounds is being rushed to be ready for the big show in October.”

October 5, 1920 – “O. L. Benson, chairman of the building committee, is to be congratulated on the work he has had done at the Fair Grounds. The buildings are practically finished; the grandstand with a seating capacity of 2500 will receive finishing touches this week; the race track will soon be ready for the running, trotting, and pacing exhibits – all for the opening date of the fair.”

October 19, 1920 – After World War I, there appears to be an exciting time to welcome soldiers home. “October 21, 1920 will find practically every ex-soldier of the county in Andalusia for that day has been designated as ‘Get Together Day’ by the former soldiers and the Fair Association. This day will be ‘Soldiers’ Day’ at the Covington County Fair. All men are coming in uniform which will be their pass to the Fair Grounds and barbeque which will be served at the noon hour. The big military band from Camp Benning (today Fort Benning) will be here to furnish the music for the parade throughout the entire day. All those who wear the uniform will be distributed a Victory Medal which will be issued from the Army booth at the Exhibit building. It is important that all men bring their discharge certificates to obtain the medal. Over 1,000 men are expected to attend. The parade will form at ten o’clock on various streets leading off the square where men will form several companies and will march to the Fair Grounds. A float appropriately decorated with the theme, ‘Those who sleep in Flander’s Fields’ will have a prominent place in the parade. There has been nothing left undone to make the day both pleasant and beneficial on ‘Soldiers’ Day.’”

October 25, 1921 – “The 2nd annual exposition of the Covington County Fair and Centennial Celebration was attended by larger crowds than last year. The exhibits were bigger and better. All in all, the fair was a success. Saturday was Farmer’s Day. The attendance Wednesday was the largest thus far and the exposition grounds were thronged until late at night. Soldiers and sailors were guests of the fair association. Former comrades met again and old acquaintances were renewed. At noon they were served a bountiful dinner by the ladies of Andalusia. Mayor T. E. Henderson welcomed the ex-service men and in a few happy remarks bade them welcome to the city.”

October 20, 1922 – “Andalusia is preparing to entertain and be entertained by Covington’s 3rd annual fair. Most of the plans are in readiness. Secretary Scherf (of the chamber of commerce) has practically everything in shape at the Fair Grounds for all attractions to be installed as well as business displays and booths.  Two exposition bands and a retinue of dare devil stunt performers, community sings, horse races, and mid-way attractions have been secured. Arrangements are being made to entertain several thousand people every day of the fair, and the citizens are making preparation to enter into the spirit of the gala occasion from the opening to the close. This year’s fair promises to live well up to the slogan, ‘Bigger, Better Than Ever.’”

September 4, 1923 – “The 4th Annual Covington County Fair will begin October 29th. Monday will be the Grand Opening. Tuesday will be observed as Fraternal Day and fraternal organizations in the county will be on hand in regalia on this day. Farm Bureau Day will be held on Wednesday, and Health Day will be a drawing card for Thursday. On Friday, School Day, fully five thousand children from every school in the city and county will participate and throng the fair grounds to see if their exhibits win blue ribbons. Industrial Day will occupy programs on Saturday, and the varied industries of the county will be depicted at that time. The fair this year will be on a more elaborate scale than ever before with more creditable exhibits and attractions.”

Beginning in March 1924, there were numerous news articles regarding the fate of the Andalusia Fair Grounds. It was reported that “Andalusia’s first textile industry was the Andala  Company now employing seventy five people. A cotton mill is to be placed on the site of the Fair Grounds and has done a great deal to inspire confidence abroad in Andalusia. It excites admiration and proclaims a community in which such cooperation is possible as a most desirable community in which to locate and embark in business.”

March 14, 1924 – “THE SITE FOR NEW COTTON MILL PURCHASED TODAY – The Fair Grounds site was sold today to Andalusia Cotton Mills which includes all real estate, buildings, electrical and water fixtures and connections, and fences for the sum of $21,750. The stockholders of the Fair Association had invested approximately $60,000. in buildings and improving the grounds which will be used for the site of the new mill and homes for the employees. A survey of the land will be made at once and construction will be commenced soon. The site is situated alongside the L & N tracks.”

September 9, 1924 – “The 5th Annual Covington County Fair  and Fall Festival will be held according to J. G. Scherf, General Manager of the fair association. Announcements that there is to be a fair has been received with sincere delight on the part of all who have publicly expressed themselves.”

The fair continued in October 1925 at the 6th annual event with a new manager, Mr. Thomas P. Littlejohn. Apparently Mr. Scherf was busy establishing the mill and village that would become Alatex. No location was mentioned.

The old newspapers do not mention a fair taking place in 1926, but an October 26, 1926 editorial encourages “Andalusia folk” to attend the State Fair in Montgomery. “Maybe we have all jumped at conclusions that county fairs have lost their popularity. We may have been mistaken in our guess. State fairs are certainly milestones of progress!” Not until 1930 is the local fair mentioned and publicized again.

September 30, 1930 – “Another new feature this year will be the new location of the fair on the Brewton Highway. Manager Littlejohn state the new location will make an ideal spot for the amusements. The admission will be only 25 cents, day or night, 15 cents for school children, free for teachers,  which no doubt will swell the attendance to a record breaking crowd. A grand display of fireworks every night at 8 o’clock will be one of the many features.”

More surprises and twists in the county fair stories that will be continued next week as we Remember When. 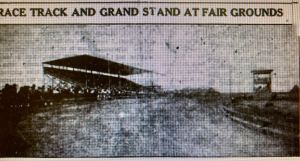