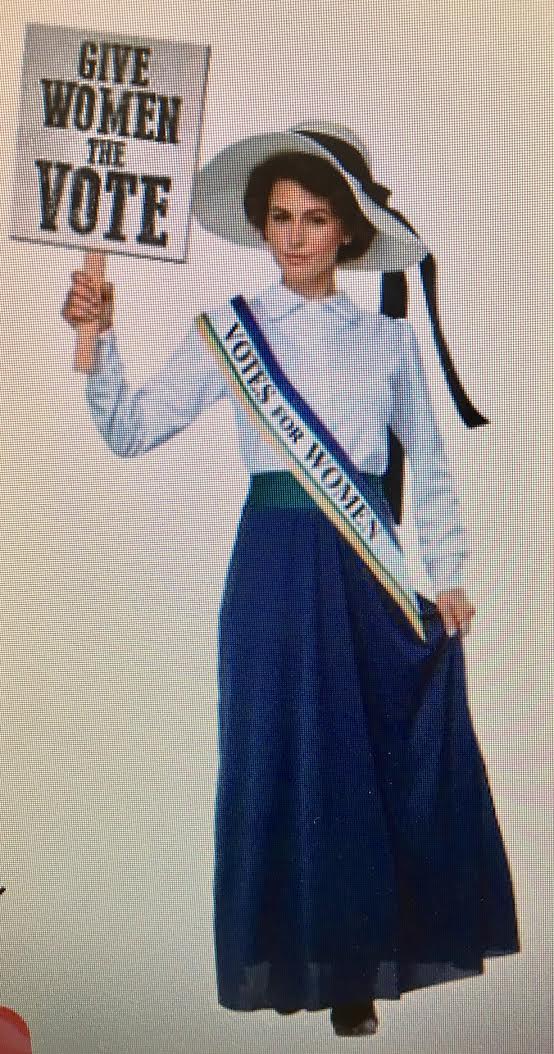 This year 2020 marks the 100th anniversary of the passage of the 19th amendment to the Constitution giving women in the U. S. the right to vote.

The crusade was remarkable, long and heroic, through three generations of leaders. Some of these “suffragists” included Lucretia Mott, Elizabeth Cady Stanton, Lucy Stone, Sojourner Truth, Susan B. Anthony, Alice Paul, Harriot Stanton Blatch, Ida B. Wells, Carrie Chapman Catt, and many others.

The fight was about much more than voting rights. It was about power, economics, race, the role of women, and what would happen to the country if women had a say in its future.

The beginnings date back to 1848 when the Declaration of Sentiments was adopted at the Women’s Rights Convention in Seneca Falls, New York. Resolution 9 demanded the right to vote for women. Most men considered women too emotional, not informed, and not intelligent enough.

The National Woman Suffrage Association was formed along with the National Woman’s Party. There were protests, pickets, hunger strikes, marches, and parades throughout American cities.  The actions of these suffragists, nicknamed “suffragettes,” resulted in nationwide publicity and in some cases arrests and ill treatment.

Alice Paul, party chairman, stated, “In spite of every obstacle in this movement that our opponents could have put in our way, women will win the right to an equal voice in the affairs of government. The Woman’s Party will not relax in its vigilance, however, until it is satisfied that no further attempts will be made to wrest from the women of the United States political equality.”

The 19th amendment to the U. S. Constitution reads as follows: “Section 1 – The right of citizens to the U. S. to vote shall not be denied or abridged by the U. S. or by any state on account of sex. Section 2 – Congress shall have power to appropriate legislation to enforce the provisions of this article.”

The amendment (originally the 16th amendment) was first submitted to Congress on January 10, 1878. It was finally passed as the 19th amendment by the House of Representatives on May 21, 1919 and by the Senate on June 4, 1919. It was ratified by 36 states (three-quarters of the states needed), one at the time from June 1919 until August 18, 1920 when the state of Tennessee was the last to ratify.

The Andalusia Star published news that in the opinion of this writer was not supportive of the movement. Editor Edward Doty wrote in September 1914, “In the Andalusia school district alone, there are 163 children of school age who can neither read nor write. Here’s a golden opportunity for (local) suffragettes to get busy and do some practical work for the betterment of government. Never mind about votes for women. There’s a greater and grander opportunity. Cut out about half of the bridge, dominoes, social calls, and give these hours to the unfortunate children.”

Editor Doty shortly thereafter received a letter from the Secretary of the Women’s Suffrage Conference held in New Orleans – “My dear Mr. Doty, Thank you for your editorial in reference to the illiteracy and the lack of opportunity among children in the South. To the shame of Alabama as well as other Southern states, women are not admitted to school elections nor permitted to serve on school boards and have no direct power to affect legislation regarding education of the youth in the states. The stigma of illiteracy now rests upon the men since women have no voice in the public school control. I am amazed that men have not long ago required women’s aid in all that affects the public life of the child. Sporadic attempts by a few charitably inclined women will not solve the problem of illiteracy. Conscientious fathers and mothers on school boards would be a cooperative influence of immense benefit to the family in the state.”

In May 1913, Doty inserted a filler in his newspaper, “A Princeton professor has defined a militant suffragetter as ‘a woman who has forgotten how to be a lady and who has not learned how to be a gentleman.’”

Before that in January 1912, a filler read, “There are at least three women to every man in the pictures on 1912 calendars. Score another one for the suffragettes. Well, girls, this is your year!”

In April 1915, another reprint from the Utica (N.Y.) Globe Doty published, “WHAT’S A SUFFRAGETTE? Here are some prize-winning descriptive epigrams submitted in a recent advertising contest in which short definitions of a suffragette were asked for: A suffragette is a woman who thinks she has been de-voted long enough. She is a woman who needs the ‘poll’ for her vaulting ambition.  A woman who would rather break windows than clean them. A woman who would rather rock the country than the cradle.”

It is a certainty that the war, World War I, brought to women a new sense of independence. This gave tremendous impetus to the cause of woman suffrage. It took WWI to help women achieve the goal since the war swayed public opinion. Nine million American women joined the war effort as ambulance drivers, worker in munitions factories, volunteers with the Red Cross stitching surgical masks and gauze bandages, and deliverers of emergency medical supplies to the front lines.

Their banners consisted of slogans such as “We WORK beside you, We FIGHT beside you, We DIE beside you – Let us VOTE beside you.” Many sample posters, flyers, buttons, and images of the time can be seen on the internet.

Alabama Public Television’s Member News writes, “The suffragettes were the first to use nonviolent civil disobedience that would become the hallmark of American political protests.” Their two-part documentary airs on PBS in July 2020, “American Experience’s The Vote” and is sure to offer a thought-provoking look at the passage of women gaining the right to vote that “resonates as much now as it did in the past.” (It is sure to have encore airings several times.)

On August 26, 1920, Secretary of State Bainbridge Colby in Washington signed the proclamation announcing officially that the suffrage movement to the Constitution had been ratified. He signed this document at his home before he left for work. This disappointed the group of suffragette workers from the headquarters of the National Women’s Party who had already gathered at the State Department hoping to be present when Secretary Colby attached his signature – another blow to the women. This was the headline story in The Andalusia Star in the August 27, 1920 edition.

Shortly thereafter Alabama Governor Kilby announced that he would call the Alabama legislature into extraordinary session Tuesday September 14, 1920 to provide measures for the legal qualification of the women voters who would participate in the November 2 election. (By the way, the state of Alabama was not one of the 36 states who voted to ratify the amendment in 1919 and 1920, but the legislature later ratified the 19th amendment in September 1953!)

Newspaper editors all over the state penned, “Will women voters take her political opinions on faith from her menfolk and so give the 19th amendment no more significance than that of doubling of the voter strength? It behooves every patriotic, home-loving woman to get busy and register, a very simple matter. Voting is a most important duty as well as a privilege.”

Editors across the country finally wrote words such as this – “When men realized that a great majority of women desired the ballot, they freely gave it to them. Now that she has her first opportunity to put to the test her newly acquired right, she is eager to give proof that she is prepared to make an intelligent use of it and is losing no opportunity to equip herself to the end.”

(It took another 40 years or so for women minority voters to be able to safely vote and cross such hurdles such as literacy tests, poll taxes, and other discriminatory practices. Many in an older generation than this writer can Remember When that fight for equality took place. That is another story!)

Bottom line, readers – Many research polls today reveal that a larger percentage of women voted in the last presidential election than men. We can learn so much by studying all about the interesting and amazing suffrage movement from 1848-1920 and then later in the early 1960s. Why would women today whose foremothers earned at great cost equality in voting not even be registered to vote and those who are registered not even bother to be informed and then go out and VOTE?

The courage of many women, their strength and determination, continued initially for a period of over seventy years no matter what the sacrifice. Through their marvelous  strategies and persistent actions, they carried out one of the most sustained and successful political movements in American history.

Many sources say that the tradition of the June bride actually began in ancient Roman times. The month of June... read more