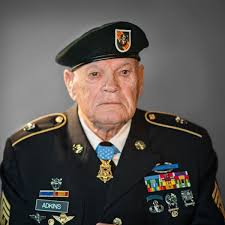 Alabama and our nation lost a wonderful soldier and hero with the death of Command Sergeant Major Bennie Adkins of Opelika. CSM Adkins was 86 years old and lost his battle with Covid-19 on Apr 17.

Bennie Adkins was born in Waurika, OK on Feb 1, 1934. He was drafted into the Army in 1956. His first assignment after basic training was to a garrison unit in Giessen, Germany. In his book, Bennie recalled that, as an Army clerk, he fingerprinted Elvis Presley. “I actually fingerprinted him. I was not a fan of Elvis’s music, but I always respected him because he served his country”. His next assignment was to the 2nd Infantry Division at Ft. Benning, GA. After completing Airborne School, he volunteered for Special Forces in 1961. He served with several Special Forces Groups [Airborne] from 1963-1971. During that time, Adkins was deployed to Vietnam on 3 separate tours.

On Adkins’ second assignment to Vietnam,  he was the Intelligence Sergeant for Detachment A-102, 5th Special Forces Group, 1st Special Forces. During the Mar 9-12, 1966 time period, his unit, located in the A Shau Valley,  came under attack from a large enemy force of Viet Cong and N. Vietnamese. Sgt. Adkins manned a mortar during the early part of the attack. His bravery during the 4 day battle, originally earned him the Distinguished Service Cross. However, under a special act of congress, the Army was asked to review all special awards given during the Vietnam war. As a result of their review, Sgt. Adkins award was given our nation’s highest award, the Congressional Medal of Honor in 2014. The citation reads as follows:

For conspicuous gallantry and intrepidity at the risk of his life above and beyond the call of duty:

Sergeant First Class Bennie G. Adkins distinguished himself by acts of gallantry and intrepidity at the risk of his life above and beyond the call of duty while serving as an Intelligence Sergeant with Detachment A-102, 5th Special Forces Group, 1st Special Forces, during combat operations against an armed enemy at Camp A Shau, Republic of Vietnam from March 9 to 12, 1966.

When the camp was attacked by a large North Vietnamese and Viet Cong force in the early morning hours, Sergeant First Class Adkins rushed through intense enemy fire and manned a mortar position continually adjusting fire for the camp, despite incurring wounds as the mortar pit received several direct hits from enemy mortars.

Upon learning that several soldiers were wounded near the center of camp, he temporarily turned the mortar over to another soldier, ran through exploding mortar rounds and dragged several comrades to safety. As the hostile fire subsided, Sergeant First Class Adkins exposed himself to sporadic sniper fire while carrying his wounded comrades to the camp dispensary.

When Sergeant First Class Adkins and his group of defenders came under heavy small arms fire from members of the Civilian Irregular Defense Group that had defected to fight with the North Vietnamese, he maneuvered outside the camp to evacuate a seriously wounded American and draw fire all the while successfully covering the rescue. When a resupply airdrop landed outside of the camp perimeter, Sergeant First Class Adkins, again, moved outside of the camp walls to retrieve the much-needed supplies.

Sergeant First Class Adkins eliminated numerous insurgents with small arms fire after withdrawing to a communications bunker with several soldiers. Running extremely low on ammunition, he returned to the mortar pit, gathered vital ammunition and ran through intense fire back to the bunker. After being ordered to evacuate the camp, Sergeant First Class Adkins and a small group of soldiers destroyed all signal equipment and classified documents dug their way out of the rear of the bunker and fought their way out of the camp. While carrying a wounded soldier to the extraction point he learned that the last helicopter had already departed.

Sergeant First Class Adkins led the group while evading the enemy until they were rescued by helicopter on March 12, 1966. During the thirty-eight-hour battle and forty-eight hours of escape and evasion, fighting with mortars, machine guns, recoilless rifles, small arms, and hand grenades, it was estimated that Sergeant First Class Adkins killed between one hundred thirty-five and one hundred seventy-five of the enemy while sustaining eighteen different wounds to his body.

Sergeant First Class Adkins’ extraordinary heroism and selflessness above and beyond the call of duty are in keeping with the highest traditions of the military service and reflect great credit upon himself, Detachment A-102, 5th Special Forces Group, 1st Special Forces and the United States Army.

After Vietnam, Sgt. Adkins served as First Sergeant for the Army Garrison Communications Command at Ft. Huachuca, AZ. After that tour ended, he attended the third class of  the Army Sergeant Major Academy at El Paso, TX. From there he served with Special Forces at Ft. Bragg, NC and then later, served in the training command for the Ft. Sherman Jungle School in the Canal Zone.

After retirement, CSM Adkins earned degrees in Accounting and Management from Troy State University. He started Adkins Accounting Services in Auburn, AL and was its CEO for 22 years. During that time he also taught classes at Southern Union College and Auburn University. In 1979, he was awarded an honorary Doctor of Laws degree by Troy University.

The story of Bennie’s life and legacy is told in a book that he co-wrote with a wonderful writer from Opelika, Katie Lamar Jackson. It’s called, “A Tiger Among Us”. The title comes from an experience during the battle in the A Shau Valley, when a tiger stalked the US soldiers thereby frightening the enemy soldiers away.

Bennie formed The Bennie Adkins Foundation in 2017. The foundation’s mission is to provide educational scholarships to Special Forces soldiers.

Memorial services for CSM Bennie Adkins  will held at a later date and he will be buried beside his beloved Mary [who died in Feb 2019] at Arlington National Cemetery.