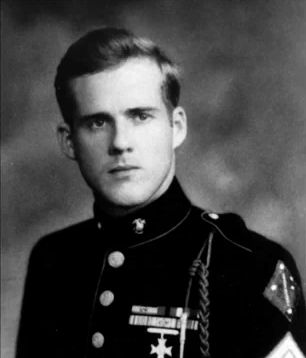 Of the many authors who have written autobiographical accounts of war, I believe Eugene B Sledge comes the closest to placing the reader in the war zone. His book, “With the Old Breed at Peleliu and Okina-wa”, is considered by many, the finest book ever written about Marine Corps combat. It was published in 1981. Sledge used notes on slips of paper and in the margins of his pocket-sized New Testament [where his notes were hidden], to reconstruct the brutal, inhuman, combat that he and his fellow Marines experienced. Some 20 years later, right before his death in 2001, he finished the manuscript for his second book, “China Marine”. In it, Sledge told about his experiences after the war,  in North China, helping guard trains, depots and bridges around the cities of Peiping and Tientsin. The Marines were there to keep food and supplies safe from the roaming, armed gangs. As it turned out, they were sometimes caught between the rival forces of Nationalist China led by Chang Kai Shek  and the Communists led by Mao Zedong.  Jeanne Sledge, Eugene’s wife, had the book published in 2002.

Eugene Bondurant Sledge was born in Mobile, AL on Nov 4, 1923. His parents were Dr. Edward Simmons Sledge and Mary Frank Sturdivant. His father was a prominent physician in Mobile.

His mother was the daughter of Ellen R Sturdivant, Dean of Women at Huntingdon College in Montgomery. Eugene grew up exploring the Mobile Bay and its estuaries, learning about nature, the plants and animals that would peak his interest in biology after the war.

Eugene Sledge graduated from Murphy High School in 1942.  For a brief time, he enrolled in the Marion Institute before joining the U S Marine Corps in Dec 1942. He was picked up for the V-12 Officer Training program and sent to Georgia Tech. Many years later, Sledge recalled a conversation with a recruiting Sergeant at Tech.  “The Sergeant asked if I had any “scars, birthmarks or other unusual features”. “I asked why such a question.”. He replied, “So they can identify you on some Pacific beach after the Japs blast off your dog tags”.

The college year ended in May 1943, and after a brief visit to Mobile, Sledge and his 180 man Marine detachment reported back to Tech. The Marines found life at the college to be easy and comfortable. Quoting Sledge, “Most of us felt that we had joined the Marines to fight, but here we were college boys again. The situation was more than many of us could stand. At the end of the first semester, 90 of us [about half the detachment] flunked out of school so that we could go into the Corps as enlisted men”.

Sledge and his buddies shipped out by train to San Diego where they underwent basic training. After basic, the men were sent to Camp Elliott or Camp Pendleton. Quoting Sledge again, “As we helped each other board the trucks, it never occurred to us why so many were being assigned to the infantry. We were destined to take the places of the ever mounting numbers of casualties in the rifle or line companies in the Pacific. We were fated to fight the war first hand. We were cannon fodder”.

After training at the mortar school at Camp Elliot, Sledge and his fellow Marines of the 46th Replacement Battalion, boarded the SS President Polk [a converted luxury liner] on Feb 28, 1944 headed for the South Pacific. They arrived Mar 17 at the port of Noumea in New Caledonia. The training  there consisted of lectures and field exercises. They were lectured by combat veteran officers and NCOs about Japanese weapons and tactics.  On May 28, they headed north to Pavuvu in the Russell Islands, arriving on Jun 2. After debarking, Sledge was assigned to the 3rd Battalion, 5th Marine Regiment.

Sledge commented, “If I’d had a choice [and there were none of course]…I would have wanted to be assigned to the 1st Marine Division..and would have chosen the 5th Regiment. The 5th Marines and the 1st Marine Division carried not only the traditions of the Corps but had traditions and a heritage of their own, a link through time with the ‘Old Corps’.”

The Marines continued training on Pavuvu, in preparation for the invasion of Peleliu, which was to take place on Sep 15, 1944. In a short break from training, they were treated to one of Bob Hope’s shows that had become a tradition for the men fighting in the war. Bob Hope, Jerry Colonna, Frances Langford and Patti Thomas put on a show that was, in Sledge’s words, “the finest entertainment I ever saw overseas”.

As a part of their training, the Marines learned to fire the M1 rifle, BAR [Browning Automatic Rifle], carbine, .45 caliber pistol, the Thompson submachine gun and the flamethrower. When it came his turn to operate the flamethrower, Sledge was sobered by the thought of “turning loose hellfire from a hose nozzle as easily as I’d water a lawn back home. To shoot the enemy with bullets or kill him with shrapnel was one of the grim necessities of war, but to fry him to death was too gruesome to contemplate. I was to learn soon, however, that the Japanese couldn’t be routed from their island defenses without it”.

On Aug 26, Sledge and Company K boarded a Navy LST [landing ship tank] for the voyage to Peleliu that would last 3 weeks. Peleliu, an island about 6 miles long and 2 miles wide, was part of the Palaus chain in the Caroline Islands. In his book describing the  invasion of Peleliu, Sledge titled the first chapter, appropriately,  “Assault Into Hell”

. For the author to try and recount the combat experiences of the Marines on Peleliu, as told by Eugene Sledge, would be a disservice to the Marines and Sledge, personally. I would recommend buying the book [which is a fairly inexpensive reprint] to read for oneself, the first person account of one of the most horrific battles ever fought by the United States Marine Corps.On the 30th of October, Sledge and the other survivors,  packed up their gear and moved out to board ship, leaving bloody Peleliu behind. Sledge noted that morning, “The salt air was delicious to breathe. What a luxury to inhale long deep breaths of fresh clean air, air that wasn’t heavy with the fetid stench of death”. The grim cost in casualties for such a small island was horrendous. The battle almost shattered the 1st Marine Division. 1,252 Marines died on Peleliu, and another 5,274 were wounded. Sledge’s  5th Infantry Regiment, alone, suffered 1,378 casualties. Keep in mind that each regiment started out with approximately 3,000 men. The Army’s 81st Infantry Division, which had come in to mop up behind the Marines, would suffer another 3,278 casualties [542 dead and 2,736 wounded].  Japanese casualties are a little sketchy, but conservative estimates put their losses at 10,900 dead and 302 became prisoners. Of the captured Japanese, only 7 were soldiers and 12 were sailors. The remainder were oriental laborers.

Company K, 3rd Battalion, 5th Marines suffered 64% casualties [of the approximate 235 men in the rifle company]. Sledge and 84 others were the only men unhurt. Only 2 of their original 7 officers survived for the trip back to Pavuvu. For their heroic actions on Peleliu and another island, Negesebus, the 1st Marine Division received the Presidential Unit Citation.

Sledge survived his first combat, a battle that was arguably, one of the bloodiest, most difficult, battles ever fought by the Marines –  or for that matter, by any other military service. Out of this terrible ordeal, Eugene Sledge came away with his own particular take as to the vindication of Marine Corps training.  “I speak only from a personal viewpoint…but in the final analysis, Peleliu was:

3- Proof that I could use my weapons and equipment efficiently under severe stress.

4- Proof that the critical factor in combat stress is duration of the combat rather than the severity.

To be continued.  John Vick

[Sources: Museum of the United States Marine Corps, Encyclopedia of Alabama {Aaron Trehub, Auburn University}, Wikipedia, “With the Old Breed at Peleliu and Okinawa” by Eugene B Sledge]

This is the first in a series about Eugene B. Sledge