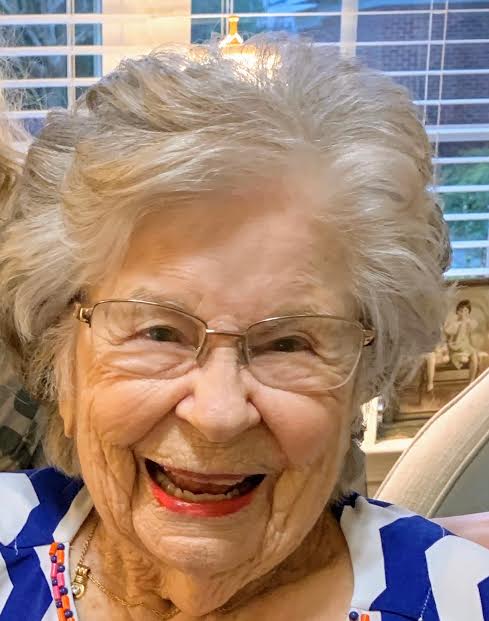 Juanita Cross Franklin’s body and knowledge were made perfect on Jan. 22, 2020, at the age of 96 when she finished her race. Her celebration of a life well-lived will be Fri., Jan. 31, at 11 a.m., at Oak Hill Funeral Home in Jasper, Alabama with visitation beginning at 10:30 a.m. Jeremy Burrage, Capstone Church, pastor will officiate.
Juanita—Mom, Poppy, Mrs. Franklin, as she was known by those who loved her—was born March 5, 1923, in Andalusia, Alabama. Through the depression years, her family lived on their farm in Pleasant Home, Alabama. Juanita learned the value of an education beginning at age five, sitting on the curb with her younger brother in front of Graves Hall, on University Blvd, in Tuscaloosa, Alabama, while her mom studied for her teaching degree. Times were different then. Juanita graduated valedictorian of her high school class, began college at Troy State University, and completed her degree at Auburn University.
Juanita met the love of her life, Louie Franklin, on a blind date at Auburn, his last social affair before his Army Air Corps training for WWII began. Juanita graduated as a dietitian and traveled for Georgia Power until Louie returned from the war and completed his degree. Their marriage began on October 11, 1947, the same day Louie received his recall notice from the Air Force. Thus, their unexpected but interesting life as a military family began. While Louie flew in the Korean War, the Cold War, and the Vietnam War, Juanita raised their family, relying on her faith in Jesus to see her through. No words can express her family’s gratitude for being the rock during those many lonely years. Juanita also ministered to other women through her work in the Officer’s Wives Clubs. Following Louie’s retirement, Juanita and Louie had 46 years living in sunny St. Petersburg, serving their Riviera church family, studying with Bible Study Fellowship, and traveling with dear friends. Together, they enjoyed their real estate careers and gained their Captain’s boating licenses. Louie and Juanita moved to Pine Valley in Tuscaloosa, Alabama, in 2015 to be closer to family. After Louie’s death, Juanita moved to Capstone Village Traditions Way where she was lovingly cared for.
Mom’s faith and smile were never dulled by her dementia. Mom will always be remembered for her smile, her faith, her prayers, and her joy in seeing others.
Mrs. Franklin was preceded in death by her devoted husband of 69 years-Louie Franklin; Brother and Sister-in-law-Bill and Mae Cross; Parents-William Isaac and Bessie Cross.
She is survived by her Daughters-Anne Franklin Crawford of Tuscaloosa, AL; Sue Messer (Ed) of Hernando, FL and Patsy Emens (Steve) of Tuscaloosa, AL; Sister-Nelda Cross Hathcock (Robert) of Lynn Haven, FL; Sister-in-law-Bobbie Franklin of Jasper, AL; Grandchildren-Stephanie Emens Balzli (Chris) of Vestavia, AL and Catherine Emens Black (Will) of Lacey’s Spring, AL; Great Grandchildren-Mary Lou Balzli, Christopher J. Balzli and Jude Atlas Black; Nieces and Nephews.
Pallbearers will be Ed Messer, Steve Emens, Chris Balzli and Will Black.
Honorary Pallbearers will be the Caring Staff at Capstone Village and Jhaikia Hill, Bernice Watkins, Ciara Abrams, Margaret Davis and Regina Harrell, M.D.
In lieu of flowers, the family asks that you consider making a donation to Pleasant Home Baptist Church Cemetery Fund, 6107 Eagle Road, Andalusia, Alabama 36420 or Bible Study Fellowship, 19001 Huebner Road, San Antonio, TX USA 78258-4019.