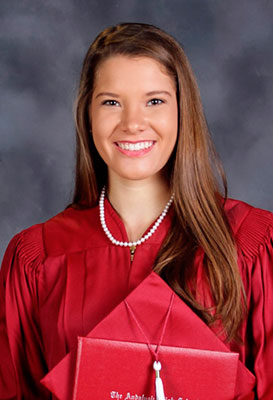 Andalusia High School’s Salutatorian Emory Garner has been most motivated by her grandfather, Heenan Spurlin, and her mother, Becky Garner.

“My grandfather, is one of my greatest role models,” Garner said. “He loves people like no one I have ever seen, and he has a heart of gold. With all that is going on in my life right now, striving to show kindness like he does is one of the most important choices I can make. My mom has also been by my side pushing me for the past four years. I strive to be the kind of mom one day who does the same for her daughter and really teaches her what teamwork is all about.”

Since Garner was in elementary school, she has known that she wanted to become either valedictorian or salutatorian.

“When I was in elementary school, I asked my mom what a valedictorian was,” Garner said. “When I got the answer, I knew I wanted to be either Val or Sal. Since then, my goals really haven’t changed. I’ve always enjoyed pushing myself academically.”

Garner said that she has not always been in the top spot, but worked hard to get where she is now.

“I actually have not always been where I am now in the rankings,” Garner said. “After my first semester of high school, I was not happy with where I stood. After that, I worked as hard as I could to move to where I wanted to be. Although I’m not necessarily proud of where I started, I want other students to know that it is never too late to compete and push yourself.”

She was involved in multiple clubs on the AHS campus, was an Andalusia City Youth Ambassador, AHS yearbook editor, varsity cheer captain and marched in the Sound Tradition marching band.

Outside of school, Garner enjoys dancing at Andalusia Dance, Tumbling and Cheer where she is a teacher, volunteering and playing the piano.

After graduation, Garner will attend Auburn University to earn her degree in civil engineering.

Garner is the daughter of Brad and Becky Garner and the granddaughter of Heenan and Amy Spurlin and Jim and Sherry Garner.

Worley: Being val was long-term goal

Pleasant Home School’s Valedictorian Bella Worley knew from a young age that she wanted to become valedictorian. “When I was... read more