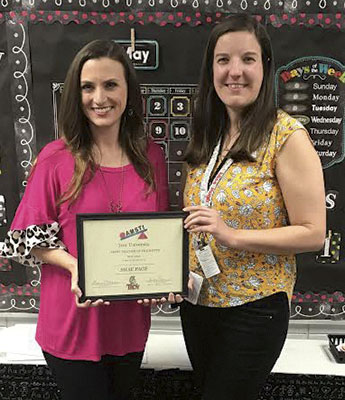 Andalusia Elementary School recently recognized Megan Pugh and Shae Page for their efforts to use math, science and technology in their classrooms.

The teachers were named AMSTI (Alabama Math, Science, and Technology Initiative) Teacher of the Month in April and May, respectively.

Pugh, who is a 2011 Andalusia High School alumna, has been teaching with AES for three years.

“I decided to become a teacher because I like encouraging and helping people get to their full potential,” Pugh said. “I like helping students learn something that they might not have been able to learn on their own.”

She incorporates AMSTI into her classroom by providing a manipulative center.

“That was one thing that I was really excited about,” Pugh said. “I got it because when we do math it is easier to access and the kids are able to see it and get it themselves.”

Pugh believes that AMSTI is very important in the development of children’s education.

“I believe AMSTI is really good for the kids,” Pugh said. “I think it is very important because it talks a lot about hands-on math and you’re bringing it to their level. That way they are actually working on it instead of just sitting there and repeating stuff that you say to them.”

When Pugh received the award, she said that she was completely shocked.

“I honestly didn’t think that I would get it,” Pugh said. “I mean I was shocked, but very excited and honored.”

Pugh graduated from the University of Alabama.

Page, who was a 2004 graduate of Andalusia High School, has been teaching for 12 years at AES.

“Teaching is what I always wanted to do,” Page said. “When I was in high school, I was a student aid for a third grade classroom and I really enjoyed working with the students and seeing their growth throughout the year. That’s the reason why I wanted to go into teaching.”

She incorporates AMSTI into her classroom by providing several hands-on learning experiences for her students.

“Especially with math we do a lot of hands-on activities,” Page said. “And I like to do partner and student-led activities with my students.”

Page believes that it is important that students get the chance to lead the activities in her classroom.

“Anytime a student can be in charge of their own learning or anytime that they can be a teacher to their peers, it helps them connect whatever skills that we are learning,” Page said. “It also helps them keep their attention on the assignment at hand. With kindergartners you have to be at the top of your game.”

For the past nine years, Straughn Middle School eighth grader Taj Patel has only known spelling bees, but after next... read more