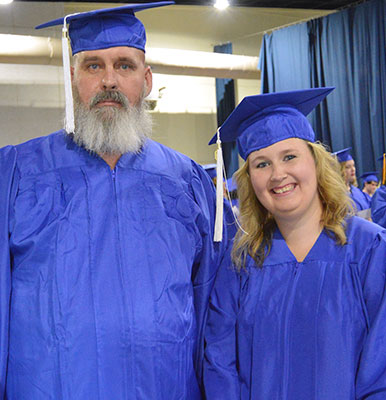 Jeff and Anna Ammons were among the hundreds of students participating in LBW’s graduation.

LBW Community College’s commencement was extra special for a father and daughter who both donned a cap and gown for the occasion.

“He went to school right after my babies were born. After my boys were about a year old, I decided to continue school, too.”

Jeff Ammons, who was born in Anchorage, Alaska, is retired from the military, where he also worked on diesels, and plans to use the knowledge gained from his current degree as an entrepreneur.

Anna graduated from Andalusia High School, and plans to transfer to Troy University. Her long-term goal is to become a neonatal nurse practitioner. Her sons, Jackson and William, are 22 months old.

“They are my motivation to keep going,” she said. “It’s not always easy, but I want to be a role model for my children.”

Asked if they had advice of non-traditional students considering enrolling in college classes, Jeff Ammons said, “Do it. A lot of people think it can’t be done, but if you have the will and the drive, you can do it.”

Anna Ammons said her father set a good example in education that encouraged her to also pursue a degree.

She also said her mom, Tamara Ammons, has been great to help with the boys.

“If I need to study, she’s always willing to watch them a little longer for me,” she said.

Andalusia Mayor Earl Johnson, who gave the commencement address, encouraged students to start every day with a project, and to always make the bed.

“It will give you a sense of pride and accomplishment,” he said.

He also encouraged students to finish what they start, and to search for role models in life.

“And if anybody every asks you to make a speech like this one, make it short,” he quipped.

For Nicole Pettie, Mother’s Day is just like every other day. “I might get coffee or breakfast in bed from... read more