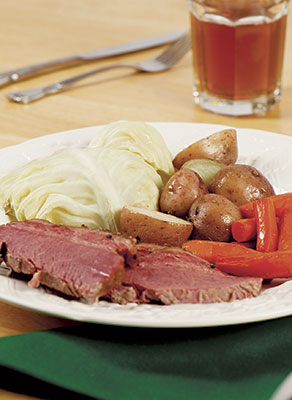 Corned beef and cabbage might not be a part of many people’s diet regimens throughout the year. But come March 17, it’s not uncommon to find people from all walks of life indulging in this beloved meal.

March 17 marks the celebration of St. Patrick, the patron saint of Ireland. Over the years, the day has also become a celebration of the Emerald Isle. Such celebrations tend to feature corned beef and cabbage, even though the dish may have little to do with Ireland (and even less to do with St. Patrick). The precise origins of the link between corned beef and St. Patrick’s Day remain a topic of debate, but some historians say the corned beef enjoyed today can be traced to New York City’s Irish immigrant population in the 19th and 20th centuries, who popularized a salted meat made from brisket that was then sold by Jewish butchers.

Regardless of the authenticity of its link to Ireland, corned beef is delicious and many modern Paddy’s Day celebrants wouldn’t think of going without it on March 17. Those who want to cook up their own can try this recipe for “Corned Beef and Cabbage” from Arthur Schwartz’s “New York City Food” (Stewart, Tabori & Chang).

Cook a whole brisket with both sections together with all its fat. (You can trim off the fat after the meat is cooked.) Whole brisket and second-cut corned beef brisket are hard to find, but your supermarket should have first-cut corned beef vacuum-packed in plastic. Choose the fattiest piece in the case and treat it gently.

You can cook the cabbage and potatoes in the same water as the corned beef. Because the other vegetables need to be cooked in water that simmers more than the meat, scoop out water from the corned beef pot and cook the vegetables in a separate pot or pots.

Place the corned beef in a pot that holds at least 5 quarts of water. Cover completely with cold water. Place over high heat and bring to a simmer.

As soon as bubbles start to break on the surface of the water, adjust the heat so the water simmers very, very gently. With a slotted spoon, skim off the residue that accumulates on the surface. When the residue stops coming to the surface, add the pickling spices.

Continue to cook, with bubbles just gently breaking on the surface, for 3 to 4 hours, until fork tender.

The meat can be safely held in its water for about 2 hours; reheat gently.

Cook the vegetables until fork tender in separate pots of boiling fresh water or, especially for the cabbage, use some of the water in which the corned beef was cooked.

Slice the corned beef and serve with  mustard and/or horseradish on a platter, surrounded with some of the vegetables or with vegetables in a separate bowl.

You don’t need to live in Louisiana to enjoy jambalaya. But perhaps nowhere is jambalaya more serious business than it... read more