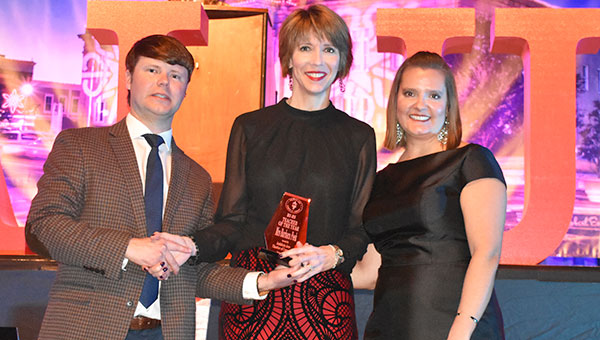 Teacher of the year Barbara Peek, center, is congratulated by outgoing Chamber president Will Bumpers and incoming president Maci Jessie.

The Andalusia Area Chamber of Commerce named Barbara Peek the 2019 Teacher of the Year.

Mrs. Peek, who has 13 years of classroom experience, currently teaches talented and gifted students in the third through fifth grades at Andalusia Elementary School. Her colleagues and friends described her as a teacher’s teacher, exemplifying “what a teacher should be.”

“Mrs. Peek has a magical way of motivating her students to think outside the box when it comes to learning,” AES Principal Brenda Johnson said. “One way in which this happens daily is through the student-led television broadcasting program.”

Mrs. Peek said when she accepted the job as gifted teacher, one of her goals was to start a daily live news broadcast. Previously, the school had done a prerecorded broadcast.

“The students are the on-camera reporters and anchors, as well as the behind the scenes crew,” she said. “Students have learned how to run the audio-video board and microphone mixer.”

They also add music to slideshows and design their own backdrops.

“Over the past few years, I have observed so much more than kids excited about being on TV,” she said. “My students have learned how to be responsible professionals.”

Students are required to  prepare for each broadcast, including writing and reviewing a script, arriving at school early, and setting up equipment.

“I can’t count how many times equipment has gone haywire, or somebody has been absent at the last minute,” she said. “When those things happen, they have to figure out how to make things work. They have learned to work as a team.”

Mrs. Peek described the news broadcast as a “real-world experience that provides an opportunity for leadership, skill development and personal growth.”

Mrs. Peek earned a bachelor’s degree in elementary education from Mississippi State University, with additional graduate study at Florida State and Troy University. Her perseverance and dedication were especially evident in 2018.

Outside of education, she has volunteered her time as a swim team coach, youth leader, and ACT tutor, and is active in the arts community.

At Christ the King Catholic Church, she helps direct the youth group and teaches Sunday School. She serves on the board of Distinguished Young Women of Covington, and is a past president of Andalusia Junior Woman’s Club.

She has appeared in many community theater productions, and currently is working as production assistant and photographer for the 2019 performance of “Mamma Mia!”

She and her husband, John, are the parents of three sons, Jacob, Ian and Adam.

Rabren is student of year