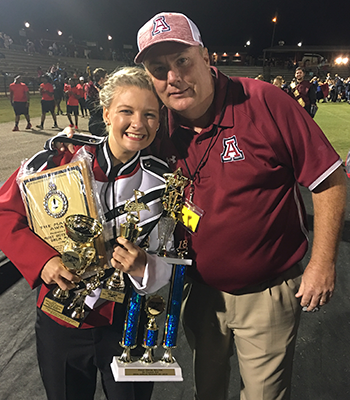 Harrison gets a congratulatory hug from band director Bennie Shellhouse.

Andalusia High School drum major Tristyn Harrison had a big day on Saturday. Competing at Little Big Horn with A Sound Tradition, Harrison earned superior ratings, best in class drum major in class 5A, and the Mallory Award, which is awarded to the drum major who scored the highest in the entire competition. 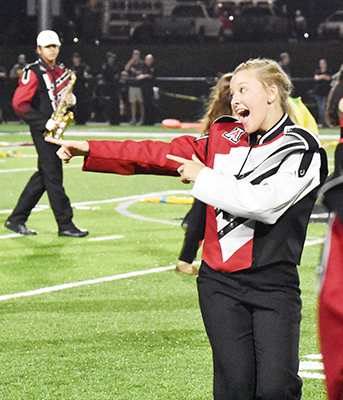 “It was never my goal to become drum major,” Harrison, a junior, said. “I talked with my grandmother a lot about what I should do and I talked with my friends to see if they saw me being drum major. When the bell sounded at 3:07 p.m., to go home, I decided to go to the meeting about it and knew that I had to audition.”

Harrison said that auditioning for drum major has been the most rewarding decision of her high school career, and credits a lot of her success to last year’s drum major Callen Woodard.

“I always watched Callen and thought it was a very interesting position to have,” Harrison said. “She helped me a lot with auditions and her intentions were always good.”

Harrison participated in Troy University’s summer drum major camp, and credits the rest of her success to that camp.

“I stayed there for a whole week and it was the first time that I stayed by myself at a camp,” Harrison said. “It was such an unforgettable experience. I would wake up at 4:30 a.m., and then go to a seven-hour class and then go to sleep at around 11 p.m. It really opened my eyes to the college world. I would say that about 80 percent of my knowledge of being a drum major came from that camp.”

Harrison said that she woke up Monday morning still in awe of having won the Mallory Award.

“The trophy is still sitting on my desk and every time I look at it, it brings me great joy,” Harrison said. “My heart is very full.”

Harrison said it’s not the award itself that makes her happy, but the reaction from her family and friends.

“Everything was a blur, but I remember my dad coming down on the field after they announced the award,” Harrison said. “He was just bawling and I was bawling and it was just a big crying session. It brings me more joy watching others react and being happy that I’m happy. That is why I do what I do.”

Since Harrison is a junior, she plans to fulfill her drum major duties until she graduates.

“I have already talked with Mr. Shellhouse and he thinks that I should keep on being drum major until I graduate,” Shellhouse said. “And I wouldn’t have it any other way.”

When it comes to making a college decision, Harrison is a little torn.

“I could go and try and be a drum major at Troy,” Harrison said. “But ever since I was little I wanted to go into optometry, and most drum majors are music education majors. If I go and try out and the person I am auditioning against is just as good as I am and makes the same scores I do, but they are a music education major, they will get it above me. It is a big decision, but I am still thinking about it.”

She said that she tries to be very involved in other extra curricular activities by participating in Anchor Club, Diamond Dolls, FCCLA, Usher Club and being an ambassador for the City of Andalusia.

Band director Bennie Shellhouse said that Harrison has developed into a great drum major since he chose her last year.

“She has great patterns and great leadership skills,” Shellhouse said. “It was a surprise that I took her as a junior, but I thought she was the best candidate for the job.”

Shellhouse said that she is one of the most diligent workers he has on the field.

“I woke up Saturday morning and my wife asked me how I thought the band was going to do at the competition,” Shellhouse said. “I told her that I knew we would win the Mallory Award because Tristyn is that good.”

Harrison is the daughter of Tony Harrison and the granddaughter of Janet Harrison.