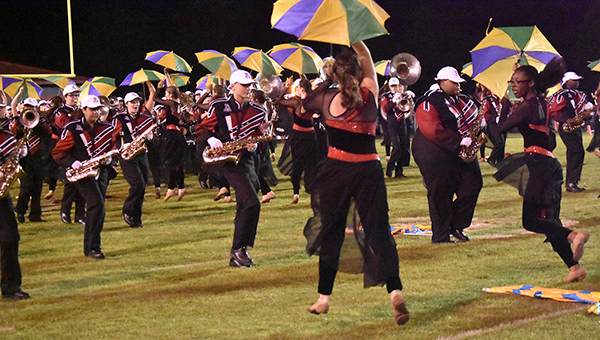 AHS’s A Sound Tradition earned top scores for its crowd-pleasing New Orleans jazz show this weekend, competing in Class 5A for the first time. Josh Dutton/Star-News

A Sound Tradition competitive in 5A against larger schools

For the first time ever, the Andalusia High School Sound Tradition competed in the 5A category at the Opp High School Little Big Horn Band Competition and walked away with superior ratings, best in class majorettes, best in class drum major and the Mallory Award.

The other bands competing in 5A were Daphne and Prattville. Daphne earned best in class band.

Shellhouse said that if they had competed in any other category they would have won best in class band.

“Since the bigger schools have the opportunity to have six band directors, they can split up into sections and practice individually,” Shellhouse said. “I believe if we were in any other class we would have won.”

With 59 freshman and 47 sophomores in the band, Shellhouse believes that the band has matured since the beginning of the year.

“Overall, their musicianship has gotten better and their marching has gotten better,” Shellhouse said. “But I think our overall maturity has really increased since the beginning of the year.”

Because of ongoing construction at Municipal Stadium in Andalusia, the band has not been able to practice in the stadium. It’s caused some minor inconvenience, Shellhouse said.

“We have done well considering our practice situation,” Shellhouse said. “When you have this big of a band, you need to be able to see the top angle when they are marching. We haven’t been able to do that because of the situation at the football stadium so that has been a little tough.”

Despite the problems, Shellhouse said he is still proud of how the band has performed this season and the community’s reactions to the show.

“We don’t do what we do just to perform in front of three judges,” Shellhouse said. “We aim to please the crowd and the people that show up on Friday nights.”

Aurelia Scherf Donald will present “The Ghost Stories of Springdale” at the October meeting of the Covington Historical Society, which... read more