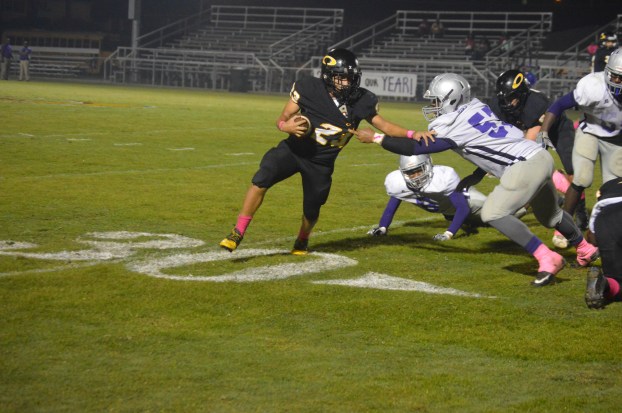 The Bobcats received the ball to start off the game on their own 35-yard line and the bad luck immediately started.

The first play there was a fumbled snap and on the second play a Pike County defensive player forced a fumble and PCHS recovered on the OHS 26-yard line.

The Bulldogs did not waste any time to score. On the first play of their drive Derrick Myhand rushed to the end zone, but after an incomplete two-point conversion it was 6-0.

After a quick three downs and a punt, the Bobcats were unable to stop the Bulldogs after a pass brought them to the Opp 30-yard line. Another run from Myhand put them in the end zone, making it 12-0 after a failed PAT, with 6:50 left in the first quarter.

The Bobcats could not get things rolling, but Myhand was quick to score again with 2:45 left in the first. He scored again to make it 18-0 after another failed two-point conversion.

The Bulldogs kept the scoring going at the beginning of the second quarter when Rayshawn Reynolds ran to the opposing 15-yard line. Myhand then punched it in the end zone to increase the Bulldogs lead 25-0.

The Bobcats looked to have some luck go their way after a long punt from the Opp punter pinned the Bulldogs on their own 7-yard line. Unfortunately, Myhand ran straight through the Bobcat defense for a 93-yard touchdown to make it 31-0 with 6:11 left in the half.

After another three and out from the Bobcats, PCHS ran the punt all the way back for a touchdown, but it was called back because of a holding penalty.

The Bulldogs started on the opposing 33-yard line after the reversed touchdown and Reynolds ran it to the end zone with 2:10 left in the half to increase their lead 37-0.

PCHS received the ball to start the second half and they did not waste any time to score. With 10:50 left in the third quarter the Bulldog quarterback connected on a pass that got them down to the opposing 10-yard line. Reynolds then made his way to the end zone to make it 44-0.

The Bobcats finally got things rolling after Allan Morrow forced a fumble and Kody Phillips recovered it.

Starting on the opposing 40-yard line, the Bobcats were facing a fourth and 14 situation, but were able to convert and get a first down. Lane Ballard then connected with Jaydon Lacey for a 35-yard reception to get them in the red zone.

With 5:07 left in the third quarter, OHS thought they had their first touchdown of the night on a fourth down conversion when a pass was tipped by a Pike County defender and caught by a Bobcat in the end zone, but it was called incomplete by an official.

The Bulldogs took over on downs and Myhand rushed again for an 87-yard touchdown to increase their lead 51-0.

OHS got their first touchdown of the night after Jordan Kelley converted on fourth down on the Pike County 8 yard line and rushed into the end zone to avoid the shutout 51-6.

“I’m gonna start with this, Fred Holland and Pike County, they are a great team,” Head coach Brent Hill said. “They are a class act and I wish them the absolute best. I have a lot of respect for them.”

Hill said that on defense they did not close any of the runs down and on offense they were not doing well with gap down schemes.

“You can’t play an explosive team like this one and not tackle them,” Hill said. “Offensively in the first half we were having trouble with our gap down schemes and I feel like in the second half we settled down and were successful with them. We are a young team and I am happy to see us fight hard there in the end.”

CONTROL WHAT THEY CAN: Bulldogs must win out for chance at playoffs

The Andalusia Bulldogs (4-4, 2-3) find themselves in a must win situation this week as they prepare to travel to... read more