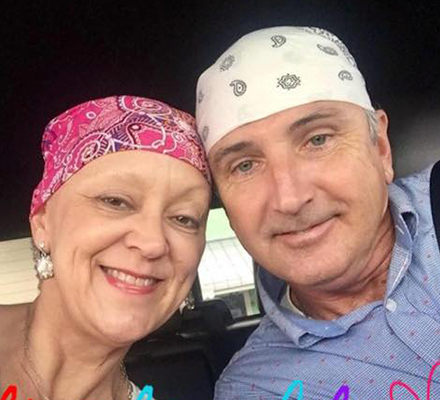 Cancer survivor Sharon Kinsaul with her husband, Brett. Mrs. Kinsaul said her husband donned a bandana because hers looked like a good idea when the couple headed out jeep riding. Courtesy photo

Sharon Kinsaul endured a grueling year of treatment and surgery after being diagnosed with ovarian cancer, but she had encouragement from her husband and “phenomenal” community support.

And in February, she got the best news imaginable: her PET scan showed no trace of disease.

Her first symptoms of cancer were gastric in nature.

“I was diagnosed with severe gastritis,” she said. “I later learned that is a symptom of ovarian cancer.”

She was treated for gastritis for two months, after having been told it would take a period of time to overcome the illness.

“I noticed that I began to be really bloated in the abdominal area,” she said. “I was losing weight in my extremities, but my girth was large.”

As the director of case management at Andalusia Health, she encounters health care professionals daily.

“Dr. (Rainer) Birk saw me one day and began to inquire about my health,” she recalled. “I told him I was concerned that I was losing weight but still bloated. He said, ‘Let’s do some additional testing.’ ”

The testing pointed to ovarian cancer. When local surgeon Dr. Tim Day did a paracentesis procedure to extract fluid, the diagnosis was confirmed. The cancer had spread to the omentum, the layer of tissue that covers the abdominal contents.

Kinsaul was referred to Dr. Mark Boatright of 21st Century Oncology, which has offices in Andalusia, and to Dr. Rodney Rocconi, a gynecologic oncologist in Mobile. The doctors agreed she would have three cycles of chemotherapy before surgery, then major abdominal surgery to remove the cancer.

Additional chemo was ordered, and over the course of the year, she completed 11 cycles.

In February, after a full body PET scan, she was told there was no evidence of disease.

Kinsaul said it is important for patients to take responsibility for their health and treatment plans.

“When you have symptoms, take it one step further,” she said. “After I was identified as a person with ovarian cancer, I asked for genetic testing. My genetic test was positive, so my chances of developing ovarian and breast cancer were high risk.”

Kinsaul has a niece who was diagnosed with breast cancer at 40, a year prior to Kinsaul’s cancer diagnosis.

“We are both BRCA positive,” she said. “She had a hysterectomy (after breast cancer treatment), and I will do the reverse. I will be seeking a preventive mastectomy.”

Kinsaul said she had a terrific support system that helped make her journey easier.

“I had a great support system in my husband,” she said of hubby Brett Kinsaul. “He was able to step in and take over and keep me motivated. I normally don’t view the glass as half full.

“Of course, my faith, and our church family (Bethany Baptist) and the community were tremendously supportive,” she said. “Patty Taylor arranged for meals to be delivered to our house. As a working mother and wife, that helped.

“I got into Facebook communities of ovarian cancer patients and survivors,” she said. “Some of the stories on there are women who are just desolate with no support. To have a community behind me, the positive support of my peers in the workplace meant a lot.”

And by community, she means her peers at Andalusia Health, her husband’s peers in Opp City Schools, and local churches.

“They have rallied around me, but also supported my husband, Brett,” she said.

At Andalusia Health, Tamara Bush and Patty Ashworth hosted a hat and scarf party when it became evident Kinsaul would lose her hair.

The immediate staff in the case management department stepped up and covered where they were needed, she said.

“I can’t imagine going through this without all of their support,” she said.

She also tried to live life to fullest, pushing through weakness.

“Dr. Rocconi was phenomenal, and so was the cancer center here in Andalusia,” she said. “There was a lot of teaching and education by Dr. Boatwright and his CRNP. They helped me stay ahead of the side effects of chemo.”

The care team provided her with a detailed regimen for managing side effects, which included therapies before and after chemo.

“If you follow it, it will really help you tolerate treatment,” she said. “I appreciate them for coming up with a regimen to help.”

“She told me, ‘Do not look at the Internet. Don’t research and look at statistics for surviving cancer.”

There are too many variations in stages and types of cancers, she said, and cancer outcomes also are affected by other underlying illnesses.

“ Just listen to the physician,” she said. “And hopefully, you’ll have a physician who is very honest in helping understand the disease.”

Because Kinsaul works in a hospital, she already knew to request copies of medical records and read them herself. She also assembled a binder of her records, in order. It helps for both medical and financial reference, she said.

The Kinsauls are the parents of three – Seth, who works with Nobile Drilling in Louisiana; Neil, who works at Unity Fiber in Mobile; and Katelyn, who is a junior at Auburn.

And they’ve recently started working on their bucket list.

“My husband and I recently purchased a travel trailer, which is something we always planned to do,” she said. “We’ve had two outings, and they were quite comical. YouTube sure came in handy.”

So far, they’ve travelled to Auburn and to Panama City to be near the beach. Next up, they plan to take a cruise.

“It’s our time,” Kinsaul said. “You know when you’re living life and in the rat race, you really don’t stop to think about taking time for yourself.”

Getting a cancer diagnosis changes that, she said.

“The first thing you think of is death,” she said. “You begin to look at things differently, and you really don’t sweat the small stuff. You take control of your own happiness, for sure.”

“Everyone has just been phenomenal,” she said. “They’ve helped me embrace life.”

Her prayer now, she said, is that she can encourage others on similar journeys.

From Isaiah, “But those who hope in the LORD will renew their strength. They will soar on wings like eagles; they will run and not grow weary, they will walk and not be faint.”

And from Jeremiah, “ For I know the plans I have for you,” declares the LORD, “plans to prosper you and not to harm you, plans to give you hope and a future.”