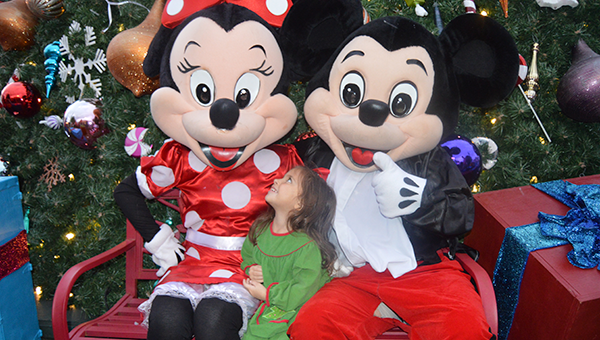 If tradition holds, today, Sat., Dec. 16,  will be one of the busiest days of the year in Candyland, when Santa is joined by a host of familiar characters for Cocoa and Characters.

This year, the event is moved to Candyland’s Springdale on Ice venue, after last year’s event drew so many youngsters that it was difficult to move on the Court Square.

This year, Chamber Executive Director Chrissie Duffy said, several changes have been made to accommodate a larger crown.

“First, we moved to Springdale, so we’re going to have plenty of room for everyone to spread out,” she said.

Each year, some of the most popular characters from Meredith’s Miracles’ annual Cookies with Characters visit Springdale for this event. Duffy said she is certain youngsters won’t be disappointed with the cast of characters who appear.

All of the characters will pose for photographs, but the larger venue allows for live entertainment, as weel.

“Belle and Anna are going to sing some of the kids’ favorite songs,” Duffy said. “There will also be storytelling, and all of the other attractions at the event also will be open.”

That would include ice skating, the Polar Bear Slide, and the Springdale Express train ride.

Among the characters expected to make an appearance are Mickey Mouse, Minnie Mouse, Elsa and Olaf, and members of Paw Patrol.

Santa Claus will be on the Court Square from 2 until 4 p.m., when he will move to Springdale and remain until 6 p.m

Santa sill on square, 2 to 4, Springdale for Cocoa with Characters from 4 until 6 p.m.

This week, Candyland has been host to at least two events each day, including field trips for students in Okaloosa, Conecuh, Crenshaw and Coffee counties.

“It’s been a good week,” Duffy said. “We’ve had a lot of positive feedback.”