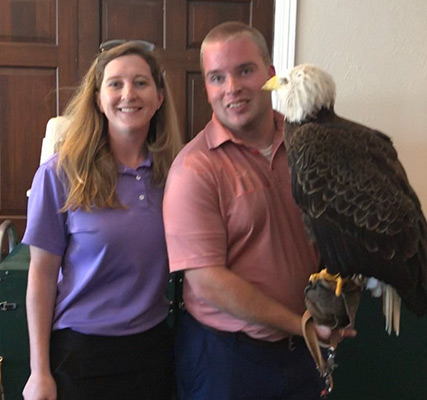 Anna WIlliams Copeland is shown with trainer Andrew Hopkins of the Southeastern Raptor Center at Auburn University and Spirit, a bald eagle, which flies before home games.

“The eagle is looking for food,” he said.

The raptor center trains AU’s bald eagle, Spirit, and golden eagle, Nova, to fly. Hopkins said beginning in about June, he takes the eagles to the stadium daily, and they only eat after they fly.

“We need for them to associate the stadium with food,” he said.

Hopkins brought a number of birds to Andalusia on Tuesday for presentations at Andalusia Elementary School and at the Andalusia Rotary Club, which sponsored the visit.

Hopkins explained that because they were travelling today, Spirit would not be fed.

“I made sure he ate double after he flew yesterday,” he said.

Asked what the eagles eat, Hopkins quipped, “Well, in football season, they like to eat elephants and bulldogs.”

Actually, their meals are more regularly rabbits, or rats. But they might be tempted by a bulldog, Hopkins said.

“When Georgia’s trainer brought UGA to our field, I had to ask her to take the dog off before we flew,” Hopkins said. “She told me, ‘Don’t worry, my dog won’t hurt your bird.’ I told her my eagle might very well eat her dog. After that, she put him under the stadium until we were done.”

Hopkins explained that trainers use a leather lure to entice the eagles to land at midfield. Finding the lure means the eagle is fed.

Habitat for Humanity of Covington County will hold a Breakfast for Home Building event on Nov. 4 at CJ’s Grille... read more