The armed and dangerous bank robbery suspect from Missouri, who was arrested earlier this week allegedly, stole nearly $10,000 from the bank.

They found Cooper under the carport of the residence.

“Officers made contact with the suspect on the side of the home as he hid under the carport,” said River Falls Police Chief Greg Jackson. “I ordered him to the ground. He refused for a moment, but finally got on the ground.” Cooper was then handcuffed and taken into custody.

Cooper was found to be in possession of a door key to the residence on Plywood Mills Road, and a credit card not in his name. Agents also discovered a .9 mm pistol under the carport in the area where Cooper had been taken into custody.

Cooper was wanted for a July 18 bank robbery at the Eldon, Mo., Citzens Bank South.

The Lake Sun reported that according to the probable cause statement filed against Cooper in Miller County, a teller – named only by the initials JS – at Citizens Bank South stated that she was helping a customer at the drive-thru window of the bank when she noticed a man with an orange shirt wrapped around his head, leaving only his eyes visible.

She was able to tell that he was a white male, and he was wearing a red shit and plaid shorts.

The report said the man came up to her with a note written on a paper towel.

Court documents state the teller said she did not remember exactly what the note said but she remembered saying, “Not a good day and something about dying.”

She stated that the only thing the suspect said to her was “hurry, hurry everything, everything.”

She gave Cooper all the money in her drawer, except what he dropped on the county.

He fled the scene on foot. 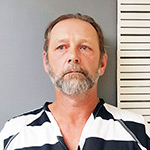 Missouri police released video stills of the suspect and what was believed to be the getaway car.

In late August, an inmate in the Moniteau County Jail contacted police with information that said it was Cooper and told police who owned the alleged getaway vehicle.

In early September, police made contact with the vehicle owner, who said they were with Cooper at the time of the robbery.

The witness said that, “all of a sudden the defendant, Cooper, got up wrote something on a paper towel and said, ‘I’ll be back in 10 minutes.’”

The witness gave a statement that said Cooper took the keys with him. The witness also told police that Cooper fled the area and later had him burn the clothes he was wearing the day of the bank robbery.

A third witness told police they saw Cooper driving a car at a high rate of speed and then saw him take a large amount of money from his pockets.

When the second witness returned, Cooper was not with him.

A fourth witness gave a statement that said Cooper had worn the same clothes for four days straight, noting that was odd because he had other clean clothes.

On Sept. 8, another probable cause statement was given to police in Missouri that said Cooper allegedly fled the area with an over-the-road trucker.

Jackson said that Cooper is a convicted sex offender for the rape of an elderly female and had been sentenced to 20 years in prison.

Cooper was arrested and charged with being a fugitive from justice, an Ex-Felon in Possession of a Firearm. He was also charged with failure to register as a sex offender. Russell Eugene Cooper was placed in the Covington County Jail without bond.

He also has two other felony warrants for methamphetamine.

Cooper is still being held in the Covington County Jail with no bond.

The Lake Sun contributed to this article.

The man whose body was found yesterday after being missing for five days was remembered as a devoted family man.... read more