Mrs. Louise Booker Owens Sullivan passed away at her residence in Brundidge on Tues., Feb. 9, 2016. A graveside service will be held at Andalusia Memorial Cemetery at 10:30 a.m. on Fri., Feb. 12, 2016, with the Rev. Dr. Jason Thrower officiating the service. Foreman Funeral Home is in charge of the services.

Louise was born in the Booker Mill Community in Conecuh County on March 29, 1920, to the late David Lee and Margaret Emily “Maggie” Smith Booker. She married John Edward Owens in December of 1937. In early 1941, they with their young son, John Edward Owens, Jr. moved to Andalusia. John Edward began working as a policeman for the city of Andalusia, and Louise soon began working at the Andala. Louise worked as a supervisor at the Andala for many, many years.

Shortly after World War II began, John Edward joined the Navy and was gone for 42 months. After the war they had a beautiful young daughter, Marsha Diane. Another daughter, Mary Louise “Belle” was born in 1956 and died in 2007.

John Edward died in 1969 and a few years later she married Wayne Sullivan, who also preceded her in death.

She was a loving wife, mother, grandmother, and friend to all she knew. She loved to read and tend her flowers as long as she was able. For most of her life she was a wonderful caretaker for any who needed her, both humans and furry animals. All who knew her will miss her.

Those unable to attend the services may sign the guest registry online at www.foremanfuneralhome.com.

Mrs. Faye Rowell Peterson, 86, of Andalusia, passed away on Sun., Feb. 7, 2016, at her residence. Funeral services will be held at Eastern Gate Memorial Funeral Home in Pensacola, on Fri., Feb. 12, 2016. Family is invited to come at 11 a.m. and friends at noon. Services will begin at 1 p.m. with the Rev. Dennis Knowles officiating. 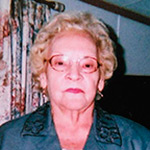 Mrs. Barton was born in Holmes County, Fla., on June 1, 1935. She enjoyed playing tennis, and was an avid reader. She made weekly trips to the Andalusia Public Library, where she enjoyed the books they have available. Opal also had a great love for her church, Southside Baptist Church, and was a member there for more than 64 years.

Funeral services will be at 10 a.m. Thurs., Feb. 11, at Southside Baptist Church with Brother Bill Pritchett officiating. Interment will follow in Andalusia Memorial Cemetery. Visitation will be from 6 until 8 p.m. Wed. at Foreman Funeral Home and at the church 30 minutes prior to services. Special music will be by Vandalyn Maddox, Mark Rudd, and Jeremy Craig.

She is survived by her husband of 52 years, Dalton Barton; her daughter and son-in-law, Allison Barton and Butch Foshee; one grandson, Hudson Foshee; and many special nieces, nephews, and friends.

In lieu of flowers, memorials may be made to Southside Baptist Church building fund.

Those unable to attend the services may sign the guest registry online at www.foremanfuneralhome.com.