2 sent to hospital after wreck Tuesday 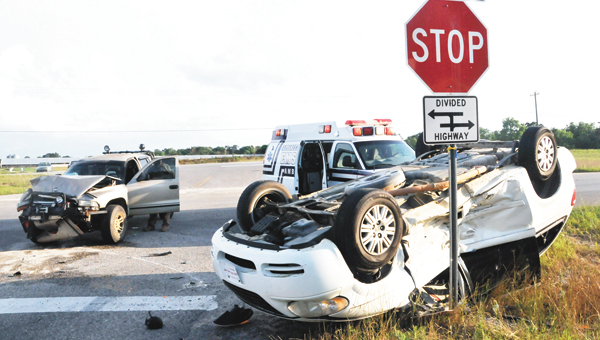 A gold Dodge Dakota 4×4 and a white Chrysler van collided at the intersection of Hwy. 84 and Airport Road Tuesday evening. | Andrew Garner/Star-News

A two-vehicle wreck at the intersection of Airport Road and Hwy. 84 sent two to the hospital Tuesday evening.

Randi Bozeman, who saw the wreck as she was on her way home from work, said a gold Dodge Dakota 4×4 hit a white Chrysler van head-on after the van tried to cross the highway going toward Airport Road.

“He just happened to catch her right at the side and flipped her over,” she said. “She was conscious when she left. As far as I know, they’ve taken her to the hospital.”

The driver of the Dakota truck was OK after the incident, enough so that he went straight to check on his passenger, who left complaining of chest pains, Bozeman said.

“People started stopping and checking on them,” she said. “All I could see was that the driver of the van had a bad cut in her arm.”

The names of those involved weren’t released by the Alabama State Troopers as of press Tuesday night.

The Opp City Board of Education met in closed session for approximately 20 minutes Tuesday before approving its personnel changes.... read more