SALUTING THOSE WHO GAVE IT ALL 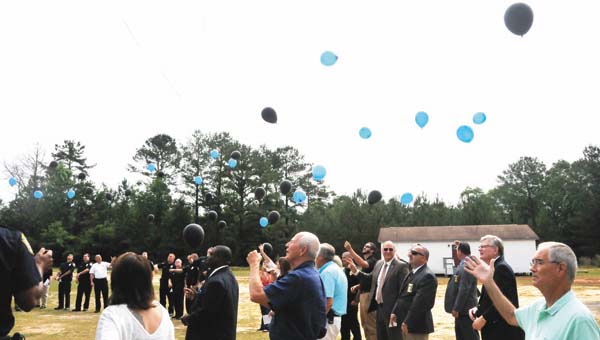 Eventgoers released balloons in memory of the officers killed in the line of duty in Covington County throughout the years. | Andrew Garner/Star-News

A somber, yet celebratory, tone filled the Wilbur Williams Law Enforcement Training Center during Wednesday morning’s Law Enforcement Memorial Service, as local and state law enforcement officials, dignitaries and citizens remembered officers who have died in the line of duty.

Hudson, who has been with the APD since 1994, said that being a part of such a fine law enforcement family has not only impacted him as a person, but as a man.

“Each year I attend this service, I always think of the peace keepers,” he said.

Hudson talked about the image of law enforcement officers in relation to the many shootings that have happened on a national scale.

“What have we as law enforcement officers done to deserve their retaliation?” he said. “To be honest, I don’t have an answer.”

Hudson ended his speech with a challenge.

“As we honor those who have fallen, I challenge you to not be bitter, but be better,” he said.

To reiterate what Hudson said, Johnson said yesterday’s service was his 11th and he can’t remember a year since where the number of random attacks on law enforcement have been as bad.

“It happened in Hattiesburg (Miss.), and that gets awful close to home,” Johnson said.

Johnson urged the law enforcement community to be careful and surge ahead.

“Just know that we support you fully and as a community, we know what the thin blue line means,” he said.

Meeks said it’s an officer’s responsibility to protect and serve those who can’t protect themselves.

“That’s who we are to protect,” Meeks said. “Protect and serve. Think about what that means, and remember those fallen officers.”

And those fallen officers have left a legacy that current officers need to carry on, Merrell said.

McGuire took the crowd back in time to the early 20th century and recounted a story where two Opp police officers were involved in a shooting.

McGuire encouraged all present to carry the hero’s torch.

“Carry the hero’s torch, and carry it with great responsibility,” he said.

A moment of silence was observed for the fallen, who were named by Chaplain Leroy Cole.

After which, “Taps” was played by Johnny Brewer and a balloon release ceremony was held in the back of the facility.

Buzzards important to cleaning up roadways

Shown is a turkey vulture. | Courtesy photo Vultures can be ugly-looking birds, but they do serve a good purpose... read more