Buzzards important to cleaning up roadways 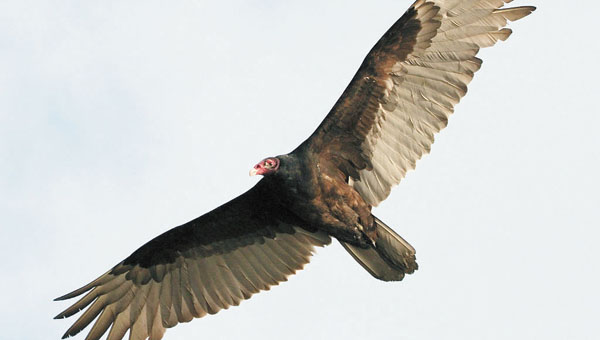 Vultures can be ugly-looking birds, but they do serve a good purpose — cleaning up the roadways.

Turkey and black vultures, also known as buzzards, are common in Covington County, and many drivers see the carnivorous birds feasting on dead and rotten carcasses either in the middle of the roadway or on the right of way.

“Having a good population of buzzards isn’t a bad thing,” Mersmann said.

Mersmann said turkey vultures have a great sense of smell and can detect a carcass from many miles away.

“They’re very good soarers,” he said. “They’re known kind of for staying up and acting like kites. They can smell from a long ways away. Usually, they’re the first ones to the carcass.”

Black vultures are large birds with a white patch near each wing tip, and don’t fly nearly as well as turkey vultures. They are primarily seen flapping their wings more than turkey vultures, Mersmann said.

Dinner for the buzzards is usually laid out for them on or near the roadway.

Alabama Department of Transportation District Manager Bill Wofford said his crews try to bury dead carcasses right away to help prevent any accidents and the increase of the buzzard population.

“We have people call in and tell us about the buzzards from time to time,” Wofford said. “If it’s in an area where we can’t bury it on the right of way due to utility lines and the terrain is in somebody’s yard, we’ll bring it back here and bury it in the district yard.”

Wofford said that buzzards are prevalent just about anywhere in the county.

“They’re all over as far as the district is concerned,” Wofford said. “We haven’t noticed any one area.”

Wofford’s district covers all state roads and bridges in Covington County and the southern part of Crenshaw County.

On a national level, Mersmann said that buzzards are widespread across the eastern part of the United States.

Mersmann said the buzzard population hasn’t been an issue, adding that he hasn’t heard of anybody trying to control them. Buzzards are classified as a non-game species in Alabama.

“There are animal disposal laws, but I don’t know what they are here in Alabama,” Mersmann said. “With large livestock, you typically bury them in most states to keep from having big animals laying out rotten.”

Don’t forget this year’s Stamp Out Hunger — the nation’s largest one-day food drive — is today, May 9. The... read more