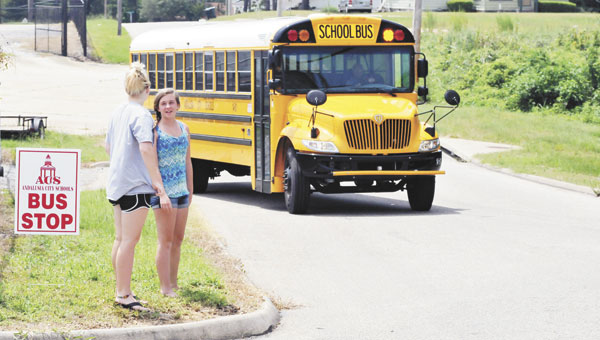 Parents of students who ride the bus to Andalusia City Schools need to be prepared for changes when school starts, system officials said this week.

First, the system has worked with CDG Engineering to streamline the bus routes for efficiency, district administrator Brook Blair said.

Blair, who manages transportation for the system, said the routes were revamped primarily for safety issues.

“We transport more than 800 children with nine bus drivers,” Blair said, adding that there also is a separate route for special needs children.

As part of the efficiency, drivers won’t stop at every door, but at designated stops.

State regulations say bus stops should not be closer together than 200 feet, she said, to allow buses to get safely in and out of traffic.

“Our main concern is for safety,” she said. “Our stops are not at intersections with heavy traffic, and we looked for potential issues like big dogs. Some children may have to cross the street to get to the bus stop.”

It is parents’ responsibility to get their children to and from the bus stop safely, she said.

“We won’t pick up the first riders until 6:45 a.m.,” Blair said. Buses will drop Andalusia Middle School students off first, she said, with the drivers’ goal being getting AES students to school at 7:30 a.m.

At AES, students will no longer arrive early and wait in the gym, but will go to their classrooms to participate in the universal breakfast served there, she said.

With the route changes, students also will ride the same bus in the morning and afternoon, with the same driver, Blair said.

The school system will put up signs designating bus stops on Aug. 4.

“Parents should look in the neighborhood for bus stop signs,” she said. “They may be able to see two. If so, they may choose which one to go to.

“We may make some adjustments in the first weeks of school,” she said. “All of the bus stops have been approved with state regulations.”

The list of bus stops is being finalized and will be printed in The Star-News on Tuesday. Blair also said school personnel will be on hand at orientation to provide bus information.

Another change planned to keep routes as efficient as possible is that drivers won’t double back on routes. In the past, if it appeared no parent was at home, the driver would keep the child on the bus and take him or her home later.

“We need to be consistent on our time,” Superintendent Ted Watson said. “And parents, need to be there, or have someone there to meet their child.”

Students who do not get off at their designated stop, will be returned to the school campus, he said.

Watson said some children may have to walk a little farther, but they will be safe.

“There is safety in numbers,” he said, adding that since no child will be picked up before 6:45 a.m., it should be daylight.

The system also has updated its transportation handbook, and parents of bus riders will be required to sign an acknowledgement of the handbook and new rules, Blair said.

Both Watson and Blair expressed their appreciation to CDG Engineering, and especially Joe Adams and Tim Ramsden. The firm provided its services for this project pro bono.

A bus hotline also is being established for parents who need to discuss transportation issues. For now, parents can call the main number of the central office, 222-3186, for the information.

Members of Carolina Baptist Church are in the middle of a mission trip – across town. The church group has... read more