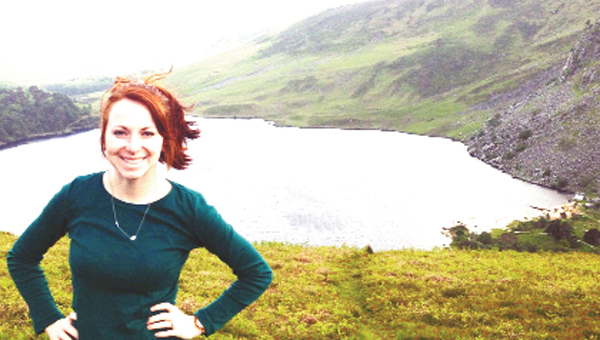 McKathan is shown in Ireland. She recently completed a study-abroad internship, which she describes as something she will remember fondly.

It wasn’t luck, but rather hard work, that recently gave a Pleasant Home graduate the chance to soak in the culture of the Irish while completing a college internship.

Sheryl McKathan, a senior majoring in health administration at Auburn University, was one of six students recently chosen for the Spruiell Scholarship, which allowed her to complete her required eight-week internship abroad.

McKathan said she recently completed her internship and is scheduled to graduate in December.

“I have been interning at the Rotunda Hospital, which is the oldest maternity hospital in the world,” McKathan said. “I have been working in administration in the colonoscopy department at Rotunda.”

And, while in Ireland, McKathan said she has had the chance to venture outside of the hospital to take advantage of her once-in-a-lifetime opportunity.

“While in Ireland, I have had the opportunity to visit many places in Dublin, as well as travel to Northern Ireland and the Wicklow Mountains and even traveled to London for a weekend,” she said.

As a whole, McKathan said the trip has been something she will always remember fondly, both personally and professionally.

“The whole process of finding out about the scholarship, to packing, to living and working in Dublin, has been an extremely humbling experience,” she said. “I have learned so much, not only in the work place, but about myself and I will forever be grateful and blessed by this opportunity.”

She is the daughter of Michael and Annelle Betts of Andalusia and the wife of Sidney McKathan.

When Tim and Rhonda Waddle came to Andalusia to buy a boat trailer from Ireland Trailer in June, they had... read more