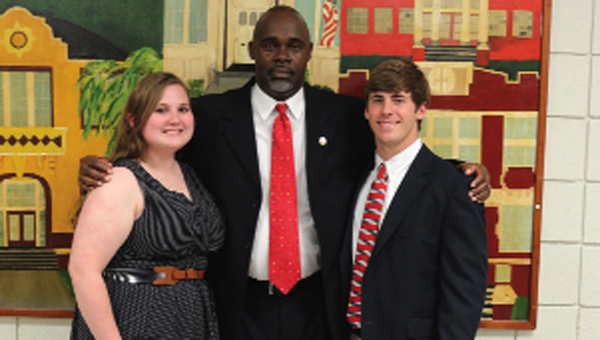 After dinner, Michael McCalman, club treasurer, introduced the guest speaker, William Alv-erson. Mr. Alverson was a 2006 graduate of Andalusia High School. He presently practices law in Andalusia with Alverson and Alverson Attorneys at Law, and is also a FIBA certified sports agent. His advice to this year’s guests was to make benchmark goals for themselves and center themselves around other goal-oriented people.

Club sponsor Mrs. Mary Frances Kelley, along with school guidance counselor  Mrs. Donna Cauley, recognized students in grades 9-12 that made the all “A” Honor Roll first semester. Also recognized were the top 10 juniors, senior National Honor Society, and the class of 2014 honor graduates. The highlight of the evening was the announcement of the Class of 2014 valedictorian, Maia Meredith, and salutatorian, Michael McCalman, by the school principal, Dr. Daniel Shakespeare.

Class of 2014 honor graduates are:

• 2013 National Honor Society seniors are all of the honor graduates, and Grace Burns and Jacob Peek.
ACS Superintendent Ted Watson concluded with praise for the academic achievements of the Class of 2014 and the underclassmen. Club vice-president Ross Graham adjourned the banquet.

Mrs. Mary Frances Kelley and the Andalusia High School Administration would like to thank the Andalusia City Schools Foundation for funding this program each year.