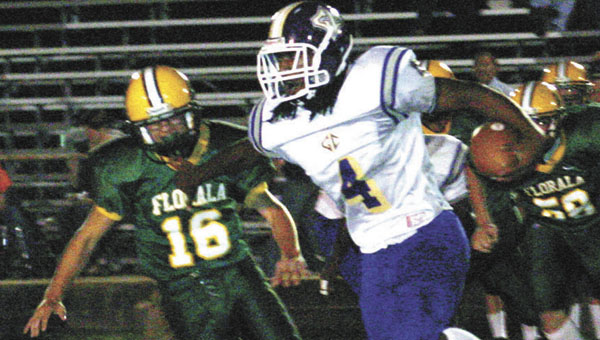 Florala head football coach Justin Jones said his team, without a doubt, got better as the season went along for the Wildcats.

“I think we had some growing pains, but our goal was to compete,” Jones said. “I think you can ask anybody we played that we were a lot more competitive in the years past.

“I’m very excited about the direction that we’re headed,” he said.

Florala completed a one-win season this year on Oct. 28, beating Red Level 26-6. However, their record reads 2-8 with a forfeit win to J.F. Shields, who didn’t field a team.

Going into the final game of the year, Jones said the team spent a lot of time preparing for the Tigers.

“We played game 10 with our best week of practice, and we were putting it all together,” he said. “Most would say,’coach went into game eight to do it,’ but it took us that long to figure out where people needed to be. It just takes time. I feel like we had sparks all through the season.”

Jones said the last-game win was grasped in a “conventional fashion.”

“I’m proud of our last game because we came out on top in a conventional fashion, not just an ‘oh, we won at the end’ fashion,” Jones said. “I felt like we were the more physical team, and I’m proud of our young men and the way we played and learned how to compete and play hard.”

Throughout this season, the Wildcats came close to winning against rival Pleasant Home in week four, and J.U. Blacksher in week five. Florala lost to the Eagles 14-13, and to J.U. Blacksher 42-35.

However, the turning point of the season for Jones came against Red Level.

“We put a lot together in that last ball game,” he said. “Our identity on offense changed a little bit once we learned about our kids and who we had. We didn’t get spring training or most of the summer with any of them.

The “identity” Jones was talking about didn’t come until week eight against McKenzie, he said. The Wildcats lost that game 48-28.

This week, the Wildcats went back to work for the off season, and started to lift weights.

“We’ve already started working on agility,” Jones said. “I tell our kids all the time the only time that success comes before work is in the dictionary. It’s time for us to go to work.”