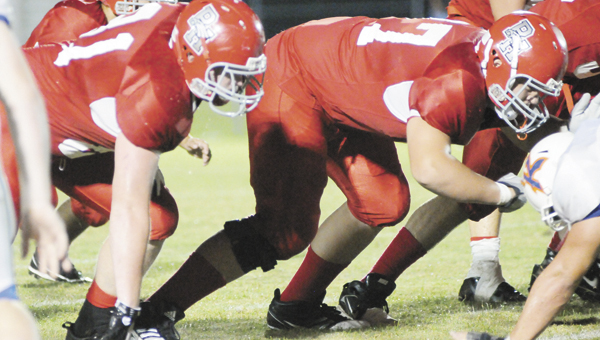 Fresh off of their first-round win over St. Jude last week, Pleasant Home’s seniors are ready for the challenge that top-ranked Linden will bring to Eagles Field this Friday night for the second round of the Class 1A state playoffs.

This week, the Eagles, led by their 12 seniors, have the chance to advance to the third round of the playoffs — something some of the seniors say is definitely possible.

PHS beat St. Jude 15-14 in overtime at Montgomery Catholic School last week to earn a berth in the second round of the playoffs, a first in the school’s history.

Eagles senior Josh O’Neal, who towers above the rest of his team in height and size, said the prospect of playing this week is “exciting.”

“It’s kind of like an honor to be the first team to play for it — the second round,” O’Neal said.

For senior kicker Kaleb Powell, advancing in the playoffs can be both good and bad.

“It’s kind of a bitter-sweet feeling,” Powell said. “We’re really excited we made it, but it’s kind of sad, because it’s our last time we’ll ever have a chance to make it again.”

Jeffery Slaughter said the seniors will try and help the Eagles to keep making history.

“I feel like if we keep the ball, then we’ve got a chance,” Slaughter said.

“I feel good about it,” Weaver said about this week’s game. “As long as we control the clock, we’ll be fine.”

While this may be the first time Pleasant Home has played in a second-round playoff contest, these seniors have seen post season action before.

Last year, the Eagles fell to Sweet Water, 48-0, in the first round. Sweet Water went on to beat Linden in the semifinals last year, and then beat R.A. Hubbard for the state title.

The PHS seniors said they believe if they win this week, they can make a run for the state title in Tuscaloosa.

The keys to success this week are to control the clock, wrap up in tackling and no fumbles, the seniors said.

“Hopefully, we’ve started something, and we’ll keep it going for years and years,” senior Dustin Taylor said. “Hopefully, we’ll go deeper in the playoffs. Everybody’s looking for a shot at state.”

The Eagles will have to get through Linden first before they try and make a run at the state title.s

“You can’t never tell in the playoffs,” Taylor said. “We’re definitely not going in there scared. We’re just going to play as hard as we can.”

Kick off in Pleasant Home tomorrow night is at 7.