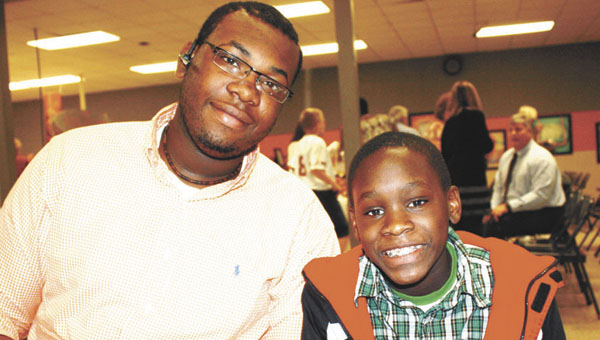 Jamal Curry is shown with Demonte Robertson. Curry and Robertson go to church together, where they play music together. | Kendra Bolling/Star-News

As the old saying goes, it takes a village to raise a child, and no one believes that more than the faculty and staff at Andalusia Middle School.

Each year, Andalusia Middle School teacher Linda Kyle asks the fresh group of sixth graders to name one person in the community who has impacted their lives.

Those individuals were honored Thursday at the quarterly AMS “Friends of Education” tea.

Students recognized “friends” or individuals who have influenced them in countless ways, ranging from athletics to picking them up from school and helping with homework.

“He teaches me a lot about music,” Robertson said. “He’s a good role model.”

“He’s honest. He teaches me stuff, and he helps me make decisions,” said Lane Prevett of his “friend” Johnny Blu.

“She’s a very Godly person,” she said. “She’s always been there for me.”

“She’s a good friend,” she said. “She teaches me a lot, and we have fun together.”

When honored, Watson told the crowd that Black was a good-looking guy.

“But has no girlfriend, so please girls take pity on Will,” he joked.

“I go to church with him,” Snider said. “He’s an encouraging man, and he encourages me. He helps me make good decisions.”

“He’s my preacher,” he said. “He saves everybody every Sunday and Wednesday. He teaches me right from wrong.”

Snider’s mother, Vanessa, said she is very impressed with the program.

“It’s an outstanding program,” she said. “It takes a community to raise a child. I think it’s awesome that Mrs. Kyle has implemented this program.”

The “friends” said they were honored to be chosen and all agreed they hope to be good role models for the young people.

“When I found out they wanted to be like me, it’s an honor,” Shaffer said. “I hope I am going to fulfill that.”

“(Millie Manring) has been a friend of mine for along time,” he said. “They eat with me at the Crow’s Nest, and I hope I’ve been a good influence.”

“It’s an honor,” Murphy said. “Julia is in the junior company, and it’s not always fun and games. It takes a lot of commitment. Julia always does what is expected, with a smile. It makes me want to teach.”

“She has many interests,” she said. “She is always working on something. She has a close group of friends and they will follow each other everywhere, even to my house.”