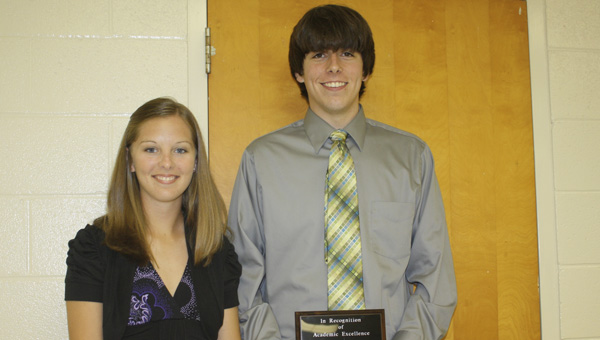 When it came right down to it, everyone knew that Pleasant Home’s Kaitlin Brookshire was going to be this year’s valedictorian – a fact that is affirmed by salutatorian Derrick Bass.

“The first day of high school, in the ninth grade, I told my teachers I was going to be the valedictorian,” Brookshire said. “I was pretty determined.”

But believe it or not, it was a very close race among a group of five students, said Bass after agreeing with Brookshire’s description of herself.

“Kaitlin was going to be valedictorian, and we were going to let her have it,” Bass said. “We all thought I was going to be third, but there was only .01 separating me and Kaitlin and .02 between me and the third person.”

Brookshire, who is the daughter of Robert and Carol Brookshire, is a member of the student council, Peer Helpers, the Beta Club and the Fellowship of Christian Athletes and is the class president.

She plans to attend the University of Alabama at Birmingham.

“I want to be an oncologist,” she said. “I read a Lurleen McDaniel book in the sixth grade. It was all sad, and the character had cancer. My grandmother died this year of ovarian cancer, and it made me sure in the fact (that being a doctor) is what I wanted to do.”

Bass, who is the son of Donna and Lamar Bass, is a sports photographer for Covington County Sports and is a member of the Beta Club and student council.

He plans to attend LBW Community College for two years before transferring to a university. He will also serve as an LBW ambassador.

“I don’t know where yet, but I think I want to get a business degree with an emphasis on information systems management,” he said.

He credited his parents with his academic success.

“They always expected me to do good,” he said. “But I think I’m going to enjoy not being in high school. I’m looking forward to new things.”

Straughn’s Kaitlynn Wiggins slides into second base during Straughn’s first game in the state tournament Thursday. The Lady Tigers were... read more