Some take tomatoes off menu 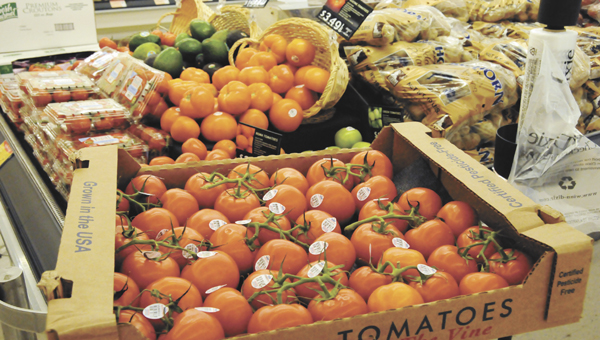 Local restaurants are dealing with price hikes and shortages of good, fresh tomatoes as a result of a recent cold snap in tomato-growing areas.

Cold snaps in Florida and Texas, along with a freeze in Mexico in early February has damaged tomatoes and other vegetables and is forcing U.S. suppliers to look for alternative routes for popular vegetables.

Experts say supplies will be limited, quality may be lower and prices will be higher until at least late March or mid-April.

The shortage is being felt by local restaurants and fast-food chains, even prompting the local Arby’s to post signs telling customers tomatoes are only available per request.

“The tomato shortage is not an Arby’s tomato shortage,” said Jim Green, Andalusia Arby’s supervisor said. “The way the crops are picked throughout the year, they ripen at certain times of the year. You can’t get all crops from the same region.”

But the region from which Arby’s gets its tomatoes is seeing a major crisis this year, he said.

“The problem is more of a supply problem,” he said. “At this point, we have not run out of tomatoes as far as our suppliers getting them to us. “If (our customers) ask for them on their sandwich, we’ll put them on there.”

Two local sandwich shops haven’t seen a shortage, but they are experiencing a price hike.

The same can be said at Steamboat.

“We can order them, but they are like $50 a case,” said employee Shelia. “We were paying about $20 a case. They are smaller, but like anything else, when produce goes up, the quality goes down, but right now we’re still serving them.”

Beef O’Brady’s Manager Yanvari Hitt that while his store is seeing an increase in the prices, the are going to continue to keep the tomatoes on the menu.

“The most recent tomatoes we’ve purchased are about a $25 increase over the last case we purchased,” he said.

Those numbers aren’t surprising after the most recent National Fruit and Vegetable Retail report, which was issued Friday by the U.S. Agriculture Department’s Agriculture Marketing Service, reported most varieties of tomatoes – regular, vine ripes, vine ripes on the vine, heirloom, Roma and cherry – all had a higher week-over-week retail price.

The only exception was vine ripe tomatoes from a greenhouse, which were cheaper last week.

Congresswoman gets an ear full